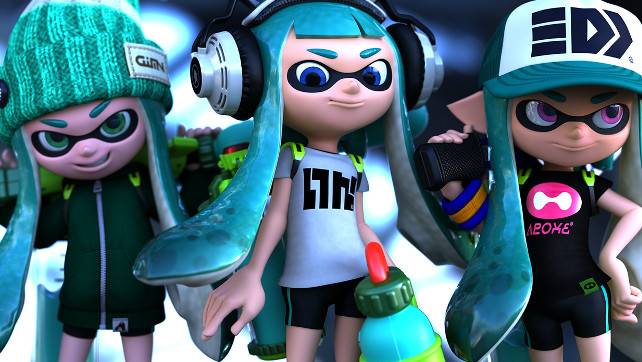 Splatoon – Available May 29 – Splatter enemies and claim your turf as ink-spraying, squid-like Inklings in Nintendo’s new mess fest! Challenge players online in chaotic four-on-four turf wars, and unleash squid powers to ink your way to victory. In these all-out online turf wars, you’ll need ink blasters, ink rollers, ink bombs and squid power on your side! Every splat of ink you spray gives you a chance to transform into a squid and hide, climb walls or travel at super speed. Rank up in online battles to unlock new weapons and fresh gear for your Inkling, complete with unique game-play perks. Or earn your stripes in the single-player mode to stop an evil octopus army that has kidnapped the electric catfish used to power the city of Inkopolis! This underground adventure has octopi to splatter, ink puzzles to solve and bosses to beat. No time to blink – prepare to ink! Click  here to view a trailer for the game.

Don’t Starve: Giant Edition – Fight, farm, craft, scavenge and do whatever it takes to survive in a wilderness filled with science, magic and things that go bump in the night. Randomly generated worlds and the constant threat of permadeath will keep you on your toes. But luckily, your trusty Wii U GamePad controller will be with you to display your inventory and map. Don’t Starve: Giant Edition will also launch with a special promotion: Customers who purchase the game will receive a bonus code for the full game that they can give to a friend. Click here to view a trailer for the game.

Mega Man Zero 3 – Surprise! Mega May 2015 wraps up today and as a special treat for the fans we are releasing Mega Man Zero 3 along with the both versions of Mega Man Battle Network 4. See all the Mega May releases here: http://www.nintendo.com/eshop/mega-may. In Mega Man Zero 3, Dr. Weil and Omega are plotting to use the Dark Elf’s power to seize command of Neo Arcadia! In this Game Boy Advance action classic, Zero must use everything at his disposal to stop their plan before all hope is lost.

Rival Turf! – Your Wii U console will be too cool for school after downloading this totally ’90s and totally awesome Super NES brawler. Punch, kick and slam your way through six stages of rough-and-tough action, solo or with a friend. Or fight against a friend and see who really owns the turf.