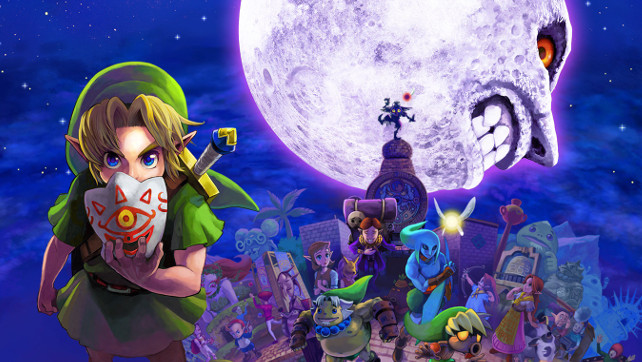 The Legend of Zelda: Majora’s Mask 3D – Available Feb. 13 – In this re-mastered and enhanced 3D version of the Nintendo classic, a masked Skull Kid drags Link into the world of Termina, where the moon is falling from the sky. Lucky for Termina, Link can reverse time and relive his last 72 hours in limitless ways. Each time, he’ll don any of his 20+ masks collected throughout the game, help different citizens, battle different bosses and ultimately change the fate of a world. This is the definitive version of a dark classic. Click here to view the trailer. In addition, to help celebrate the game’s release, Eiji Aonuma, the producer of The Legend of Zelda: Majora’s Mask is hosting a Miiverse drawing event! For more details, check out Mr. Aonuma’s message in the Art Academy SketchPad community in Miiverse.

Monster Hunter 4 Ultimate – Available Feb. 13 – Experience big game hunting with Monster Hunter 4 Ultimate, available exclusively on the Nintendo 3DS system. Join up with a traveling caravan of hunters to explore new lands in pursuit of larger-than-life beasts. Play alone in a robust single-player experience or join with up to three other players via a local connection or online via Wi-Fi to tackle hundreds of quests and take down ferocious monsters. Click here to view the trailer.

3D Fantasy Zone – This classic arcade shooter was first released in 1986, and is now available exclusively on Nintendo 3DS. Take command of the spaceship Opa-Opa to fight bizarre enemy invaders in this cosmic challenge.

Blek – Blek is a unique, award-winning game about imagination and personality. Everything you draw keeps moving, and watching your creations move is like magic. Blek can’t be explained in words. Click here to view the trailer

BREATH OF FIRE – The Dark Dragons are in search of six keys to release the devious goddess Tyr. In the Dark Dragons’ destructive wake, Ryu will need to rediscover the lost powers of the Light Dragons, rely on his companions and save his sister – and the entire world. Will he succeed in his quest?