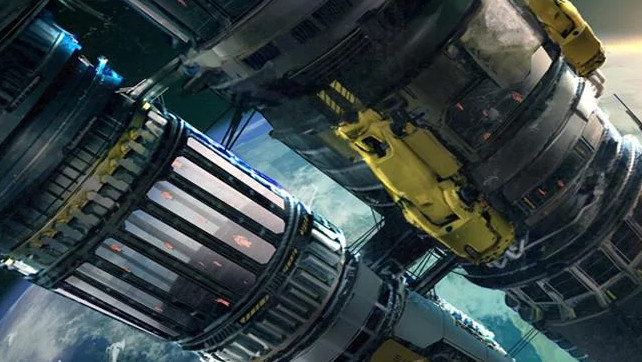 Space Lift Dangers Panic! is a quick little arcade game on the Nintendo 3DS eShop that can be played in quick five minute bursts, but the repetitive gameplay also makes the game makes the game hard to play for more than ten minutes at a time.

Let’s face it, playing games on a portable game system comes in two kinds. One is the game that you sit in the dark at home and marathon through while the other is the kind where you whip out your system and play for just a few minutes. Space Lift Danger Panic! is the latter.

The game is really easy to pick up and play, and despite the epic intro text for the game, the game is very basic. It is exactly what the game designers bill it as, the ultimate retro-arcade challenge.

But here’s the back story to the game anyway, just for fun.

The Ceranthian’s have been using their space lift to travel between the surface of their home planet and low orbit, where they go about their daily work. A series of attacks on their planet have culminated with the unleashing of a space weapon inside the lift putting all the travellers in deadly peril.

Your job is to use a teleportation cannon to fire portals into the traveller’s path and transport them to safety. It will be tough, but you are the Ceranthian’s only hope 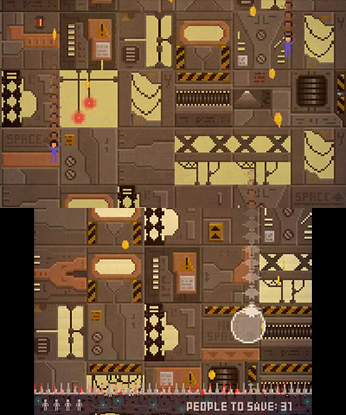 So here’s the basic premise of the game. You fire portals and save people. Each level starts off with people falling from the top of the top screen towards a spikey doom at the bottom of the touch screen. To save them you tap on the touch screen below them to open a portal and save their lives. Of course to add to the chaos and to the challenge, there are multiple people falling and the portals you open don’t last very long.

The higher the level and more people are falling, and the more spread out they are. You’ll have to be quick to tap and save them all.

In the start you will have one life, which basically means that you can miss one person and still complete the level. Let too many people perish and you’ll lose the level. Though as you progress through the game you will earn coins which you can use to buy more lives. This is very helpful as you go from level to level, of which there are forty.

You can also challenge you friends in survival mode and the game also has global leaderboards, which is a nice touch for such a simple game.

One thing that I definitely appreciate is the music. The audio of the game throws right back to the chiptunes days of the NES and SNES. The music is uptempo and energetic, which definitely fits the rapid fire nature of the game. One other neat tidbit, is that you can listen to and buy the chiptune soundtrack from the game here. 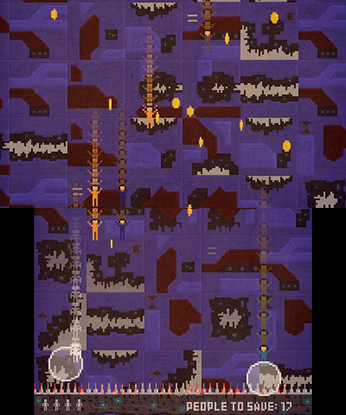 While this isn’t a game that you can really sit and play for a long time, it is fun in short doses.

The game is now available in the Nintendo 3DS eShop and retails for $2.99. It’s rated E for everyone.