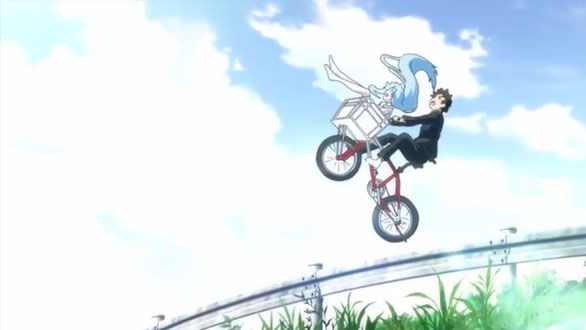 It’s time to yet again delve into NIS America’s recent anime release, Ground Control To Psychoelectric Girl! Naturally, there will be spoilers but for those of you interested in taking a deeper look into this series before giving it a go, or some of you who just want to reflect, come in and join us.

What sort of drama will Makoto and Erio find themselves in now?

These next two episodes have a very strong focus and actually quite a lot of content that could have become a drag without the quality writing this series has. Clearly trying to tell a story, more than trying to pad a series out, Psychoelectric Girl has done a great job of keeping the story moving even with it’s relatively slower start in the first two episodes. Maybe it’s like a bike ride and you need to get pedaling first to get up to speed. Heh.

Episode three has the most significant moment as we see Makoto trying to break Erio of her belief that she is an alien. Yet it also shows us that he deeply cares for his cousin regardless of how little he knows about her. Clearly family is important to Makoto and he wants what is best for her. We see Makoto take off with Erio at the end in an attempt to show she cannot fly, by driving their bike off a cliff. Both end of tumbling into the ocean below. Erio seems to accept this outcome as a realization that she may not be an alien after all. She still lacks memories, but seems to come to terms with this revelation.

We’re also shown again that Makoto’s aunt Meme is quite the flirt. It’s a running joke that is actually quite fun since whatever her intentions are, Makoto’s uncomfortable reaction to her advances keep it funny. It’s also shown that she is protective of her daughter Erio when Makoto and his aunt have a heart to heart about her.

The following episode concludes that even though Makoto may have shown Erio that she potentially isn’t an alien, there are still consequences for driving a bike off of a cliff. With a broken arm, Makoto spends two weeks in the hospital where his two friends from school (and potential two love interests) visit him. The whole hospital visit is where things could have really slowed down. Instead, episode four has some great visuals such as the plane and blimp flying by outside the hospital room window. Even the trip home for Makoto has a brief couple views of residential areas. While they are devoid of other humans in the scene, it sort of brings a whole breath of fresh air after being in the stuffy hospital scene. It symbolizes Makoto’s release well.

Erio seems to accept Makoto’s concept that she may not be an alien. She even abandons her futon at the end of this episode to go out with Meme and Makoto to a family restaurant. However, Makoto still keeps an open mind about the possibility that she could be an alien, or have aliens watching over her. Regardless, his intentions have been clearly shown in these episodes and it’s now a matter of Erio wanting to regain her memories. While one story line closes, Psychoelectric Girl keeps the interest flowing.

The quirky points system at the end of each episode is explained further at the start of Makoto’s hospital visit in this episode as well. It basically amounts to judging oneself on having lived a fulfilling childhood or not. It’s a good message, and an encouragement to get out there and enjoy life.