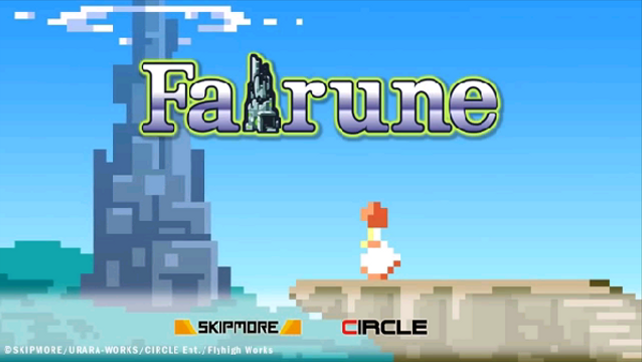 Fairune is an 8-bit looking action RPG with a very basic setup and gameplay mechanic. It’s simple to play and brings you right back to the nostalgia of the NES days, though this game is even easier to play than even the original The Legend of Zelda.

Find it too hard to press a button to swing and attack an enemy? Well don’t worry. All you have to do is run into an enemy, or have them run into you, and you’ll attack them and take damage. It actually works pretty well and makes the game a bit more quickly paced.

If you’ve played CIRCLE’s earlier game Witch & Hero you’ll know what to expect from this mechanic, and I actually like it a lot because you can focus more on getting around and less on constantly attacking the hordes of monsters which are everywhere. 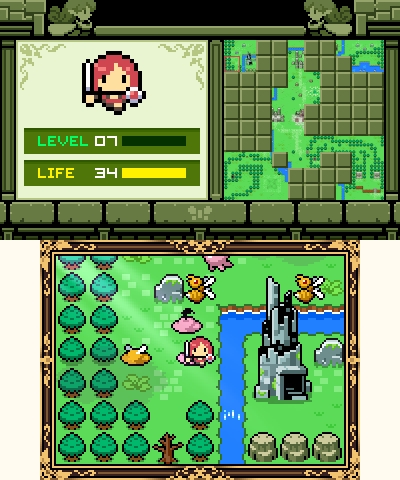 The way that this is handled is pretty good too. As you level up you will be able to “attack” new enemies. If your level is too low, you will take hefty damage from certain enemies while being unable to attack them. These are enemies you will need to be careful and avoid. There is no way to defeat these enemies, so just stay clear. However, enemies which are right at your level will be defeated with a single blow while dealing relatively low damage to yourself. Monsters which are just a bit stronger can be attacked and defeated with a quick bump, though you’ll take more damage when facing them.

This actually allows you to level up just enough to get into new areas but you can’t actually level grind to max out quickly. While the monsters are plentiful and they respawn every time you enter a screen, any that are too weak will still be defeated when you bump them but you won’t gain any experience for them.

Continueing with the simplicity of the action RPG, you don’t have to worry about healing items. You have a small inventory of key items which you pick up through the game, and one of these is a piece of mana. You can use this on certain spots in the world to activate a healing spot. You simply come back to these spots around the world to heal when you are getting low in life. There aren’t any potions to carry around with you.

One of the things that I found a bit tough with the game was what to do when I got stuck. There are no hints to help you figure it out and there are also no other people (NPCs) around to talk to. Not sure what to do next with that key item you picked up? Well you’d better wander around aimlessly until you figure it out. 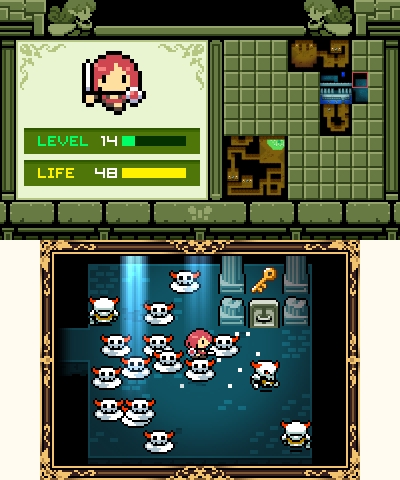 More than once I ran into this predicament where I found a new item and had no idea where to use it. I spend countless amounts of time wandering around looking for some clue as to what I should do next. Sometimes knowing where I should need to go on the map, but not having a clue what to do or where to use a key item to get myself going again.

A few times I would discover something new, find a new item and rejoiced that I could move on in the game. Then I realized that I couldn’t go any further and still didn’t know what to do next. Some of the ways that you need to go are hidden in secret passages, and they are very secret. Some of them are so well hidden that you wouldn’t know that there was one unless you tried randomly walking into walls. Not even a pixel is out of place to catch your eye and give you a clue.

But overall the game is solid, the music is great and the game has a feel like a hybrid between Witch & Hero and The Legend of Zelda. It’s great fun to play and I really enjoyed it. I just wish I could figure out what to do now. I really want to beat this game!