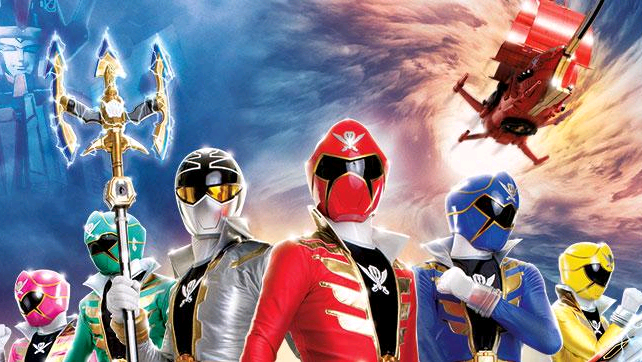 Power Rangers Super MegaForce on the Nintendo 3DS is an average beat ’em up action game, which does what it needs to do but is nothing spectacular. It will surely satisfy the younger fans of the series, but if you’re looking for a fast paced action game you’ll need to look elsewhere.

The game reminds me of the Double Dragon games from the NES days where you play through levels with a pair of fighters. The similarity ends there however as the levels are much more basic, the action slower paced and it’s very repetitive.

Ruthless Prince Vekar has arrived with his massive alien Armada to conquer the Earth. To face this new evil threat, the MegaForce Rangers utilize special Morphers and Keys, which allow them to morph into the Super MegaForce Rangers! That’s the setup of the game, though there is very limited story in the game.

You start off each level by selecting two Power Rangers to play with. You’ll play as one with the cpu controlling the other Ranger. Each stage has six levels, with the first four featuring the exact same set up. Walk to the right, collect randomly placed coins and defeat enemies that pop up. You basically just run to the right until a forcefield blocks you on either side. Beat up the baddies and then you can continue to the right. This happens a few times and then you the level is over. 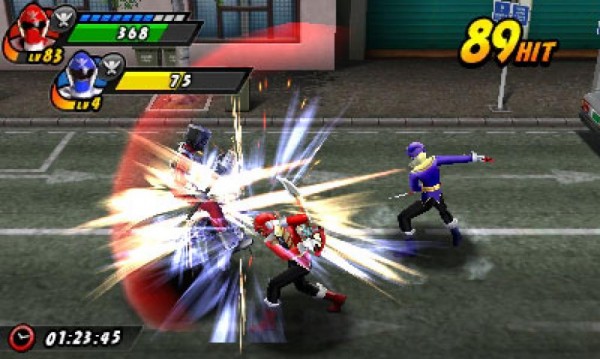 The fifth level you face off against a boss enemy with the sixth and final on each stage a slow and lumbering Megazord battle.

Controls in the game aren’t bad, though it does suffer from attack lag. Basically when you start an attack combo you have to wait for it to complete before you can move again. This is only a pain if you miss the enemy and then have to wait for your wild swinging to subside before you can redirect your attack. This also leaves you wide open for attack from the enemies, including strikes and ranged attacks.

You also can’t attack up or down, so if you’re not right beside an enemy you’ll be swinging at nothing until you do a spinning strike.

Each Rangers has four basic moves. You can attack, shoot a weapon, jump and charge a larger attack which deals more damage. Jumping and pressing the attack sends forth a stronger strike, though ultimately most of the early enemies are pretty basic and weak.

I did like though that you can select your difficulty for each level. You have a choice of four difficulties, so if you do find a level too tough you can make it easier. Or likewise you can make it tougher if you’d like. It’s nice that you’re not locked in to one set difficulty chosen at the start of the game.

Through the levels, as you play, you can level up your Rangers. The more you play them the stronger they’ll become, with the Rangers you’re not using also slowly leveling up as well. You can also use the coins you collect, which are translated into stars after each battle, to buy upgrades for your team, as well as healing items and also level boosters.

This upgrading and leveling up could have really be a great thing, if the levels weren’t so repetitive.

There are a few different types of levels with lava in one and multiple heights to jump around, but overall the levels and enemies are pretty repetitive and gets a bit boring. 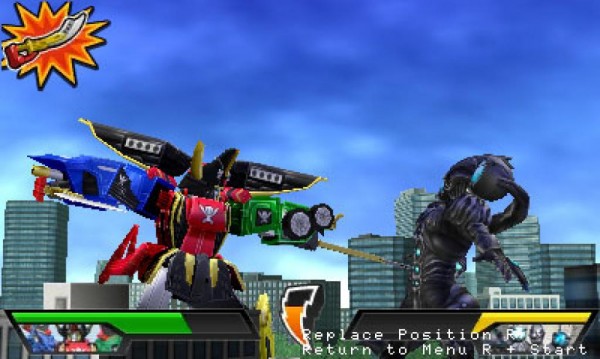 My only other real gripe is that, while I don’t typically play a lot of my games in 3D, there is no 3D support for this game at all. The music and sound effects are both alright and the game looks good enough, though nothing spectacular. It did also get a bit tiresome hearing the Ranger yell “” at the end of every stage.

If you enjoy the Power Rangers series the game isn’t bad, though with the very generic look and gameplay this could have easily been an unlicensed title and released through the Nintendo 3DS eShop.