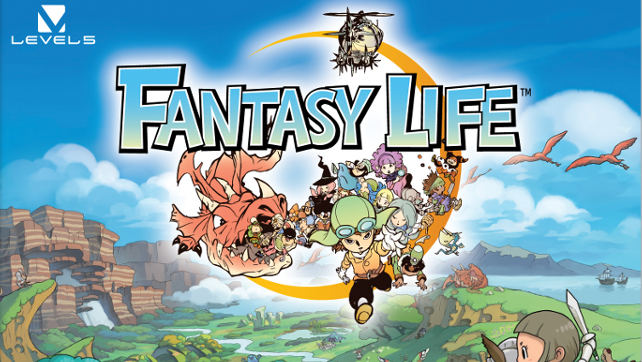 Fantasy Life – It’s time to get a Life! Embark on the adventure of your dream life as you craft, cast, battle and role-play like never before. With the innovative Life system, your choices don’t just upgrade characters – they help shape your journey! Fantasy Life will be available on Oct. 24. Click here to watch a trailer for the game.

Pokémon Art Academy – Players take on the role of a young aspiring artist who enrolls in the prestigious (and colorful!) Pokémon Art Academy to learn how to draw Pokémon under the tutelage of Professor Andy. Through novice lessons they are taught the basics of art and introduced to various tools and techniques they will use to create a variety of different Pokémon from every known region. Pokémon Art Academy will be available on Oct. 24. Click here to watch a trailer for the game. Get a download code for the Pokémon Omega Ruby and Pokémon Alpha Sapphire Special Demo Version when purchasing the Pokémon Art Academy game exclusively in the Nintendo eShop on Nintendo 3DS or Nintendo 2DS (download codes are available while supplies last). Pokémon Omega Ruby and Pokémon Alpha Sapphire, the next games in the beloved Pokémon series, both launch on Nov. 21.

Shantae and the Pirate’s Curse – Set sail for adventure with Shantae, the belly-dancing, hair-whipping half-genie. When Shantae loses her genie magic, she must team up with her arch nemesis Risky Boots and become a pirate in order to save Sequin Land from an evil curse. In this new adventure, Shantae travels to mysterious islands, explores daunting labyrinths, masters pirate weapons and slays huge boss monsters with her signature hair-whip attack. Shantae and The Pirate’s Curse is now available exclusively on Nintendo 3DS. Click here to watch a trailer for this game.

Big Hero 6 Battle in the Bay – Set after the events of the film, the game follows robotics prodigy Hiro Hamada and his like-minded friends turned heroes – Baymax, GoGo Tomago, Wasabi, Honey Lemon, and Fred – as they attempt to save the city of San Fransokyo from a battlebot invasion. The adventurous gameplay is brought to life with vibrant comic-style storytelling that gives players control of the stars of the film in this action-packed combat platformer. – Available Oct. 28

KORG DSN-12 – KORG DSN-12 software makes it easy for anyone to enjoy serious sound-creation and song production with analog synthesizers. The software provides 12 monophonic synthesizers. Each one lets you add 3 effects, allowing a broad range of powerful sounds that you would not expect from a game machine. You can make your ideas take shape very quickly, you can enjoy constructing songs in real time while performing in a DJ-like manner. Don’t miss the world’s first 3D display oscilloscope screen!

Saban’s Power Rangers Super Megaforce –The Ruthless Prince Vekar has arrived with his massive alien Armada to conquer Earth. To face this new evil threat, the MEGAFORCE RANGERS utilize special Morphers and Keys, which allow them to morph into the SUPER MEGAFORCE RANGERS! Using these special Keys, you’ll have the incredible ability to play as Legendary Rangers from the past, gaining access to their amazing powers and weapons. Can you channel your inner Super Megaforce to stop the evil Prince Vekar once and for all? – Available Oct. 28

Secret Journeys: Cities of the World – Search for mysterious objects hidden in incredible cities around the world! Explore Venice, Mumbai, Beijing and Nairobi on a globetrotting seek and find adventure. Search buildings, streets, landmarks and more as you delve into detailed and evocative indoor and outdoor scenes filled with over 1000 carefully placed items. Plus, enjoy a challenging sliding tile puzzle for each exotic location. As you unlock each new scene, you’ll be drawn deeper into the hidden object hunt. Are you ready to see the world on a Secret Journey?

The Legend of Korra: A New Era Begins – Join Korra and her friends to stop an ancient evil that has emerged from the portal and threatens the balance of both worlds! Original Avatar storyline penned by the TV show’s creators. Wield the power of all 4 elements—water, earth, fire, and air as only the Avatar can! Take control of Korra and her friends in strategic battles spanning the world. Beat overwhelming odds by activating the all-powerful Avatar state. – Available Oct. 28

A bewitching Bayonetta deal! – Anyone who purchases the digital version of Bayonetta or Bayonetta 2 in the Nintendo eShop on Wii U will receive an automatic discount that will be applied to the purchase of the other game, making the total for both games just $59.98.

Castlevania: Aria of Sorrow – The year is 2035, and Soma Cruz is about to witness the first solar eclipse of the 21st century when he suddenly blacks out—only to awaken inside a mysterious castle. As Soma, you must navigate the castle’s labyrinths while confronting perilous monsters at every turn with physical attacks and magical spells. Using the Tactical Soul system, collect souls of enemies to learn their abilities and equip them to activate new powers. But beware—you must escape before evil consumes you! Once you’ve survived the horrors of the castle, there are four other modes waiting for you to try.