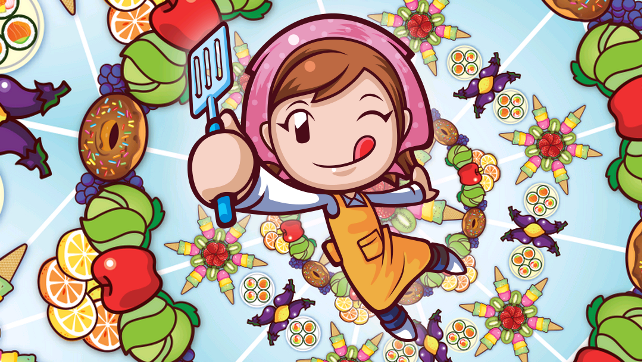 The Cooking Mama series has been around on the Nintendo DS and 3DS for a few years now, but I haven’t really tried the game before now. I tried a demo of one a few years ago but that’s about it. So I’ve taken to downloading the demo for the latest game in the series, Cooking Mama 5: Bon Appétit!, to see what’s cooking.

So first off this game has the cute factor cranked up. The game has kid appeal for sure, with bright colours, peppy music and a cute main character … Mama. When you complete the tasks you will be greeted with encouragement, even if you do mess up a bit.

The game has six modes in the main menu, though only three are accessible in the demo and are limited. Of course this is just the demo, so the full game should have a LOT more to cook and do.

The three available to try out in the demo are a “feeding the fish” minigame, a spelling mini-game, and the main course – cooking a meal.

The meal you cook in the demo are Cabbage Roll Tomato Soup. You do this through a series of on screen motions to complete tasks such as chopping, stirring and other cooking moves. Some of them are easily done while others require precise movement and timing. Can you cook better than Mama?

The full game will be released in stores and the Nintendo 3DS eShop on September 16th. The game is set to retail for $34.99 CAD. You can download the demo yourself here.