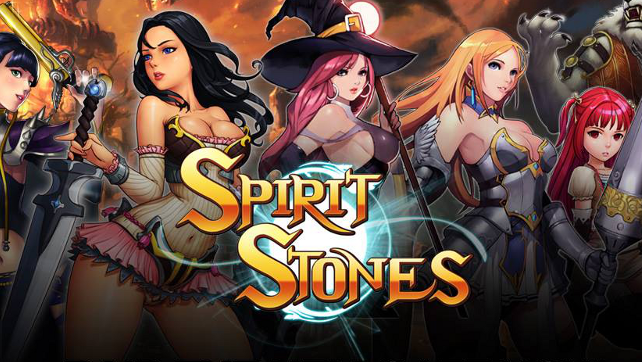 I don’t know what it is about trading card games that are so addictive. There’s something about building your collection of cards from nothing to something very powerful that appeals to me, even in digital form. But Spirit Stones isn’t just another collectible trading card game. It’s something much more than that.

What do you get if a trading card game, a role-playing game AND a puzzle game collided? You would get one of the most addicting games I’ve played in a really long time.

At its core, Spirit Stones is a puzzle game. Much like other games you’ve probably played, this part of the game will feel very familiar. You are presented with the lower half of the screen filled with different coloured orbs. Using your finger you must swipe together three or more orbs of the same colour to eliminate them. Once you do more will fall from the top of the screen. Simple stuff, and there are four different coloured orbs: blue, red, green and yellow. Now here is where genres start to collide. 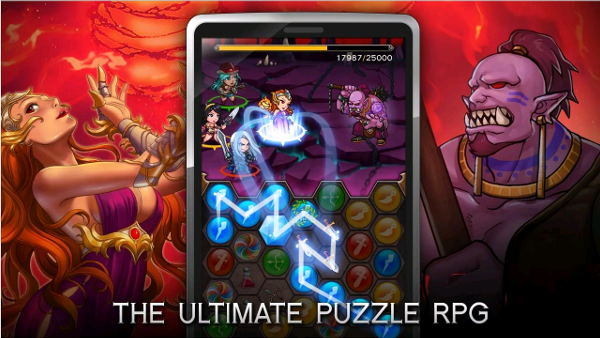 The top of the screen shows you an RPG battle scene, with your four characters on the left and enemy monsters on the right. You’ll also notice that your heros are also represented by one of four colours, the same blue, red green and yellow. When you connect three or more orbs on the bottom screen, that energy is transfered to your hero on the top of the screen who then unleashes an attack on the monsters.

In addition to the coloured orbs on the bottom of screen there are also items, such as a sword, bow and arrow, potion and colour wheel. You can connect one type of these along with your colourful orbs, which will unleash an even greater combo attack. For example, when you connect three green orbs your archer will attack the enemies. However if you also connect to a sword, that sword will eliminate a whole diagonal line of other orbs. If this combo clears another colour, that hero will also send out an attack. You can also connect with more than one sword for a chance at even more attacks, but can’t link together different types of items, like a sword and a bomb. However if the sword eliminates another items, this can increase the combo and also the damage your party inflicts.

The monsters which you are fighting on the top screen can fight back, and they are on a timer represented by the number next to them. For example if there is a three next to them, then you have three turns before they attack. If there is a one then they will attack after your next move. Your heros will attack the monster closest to them, however you can tap and select a monster to focus all of your attacks on them.

During the battle stages, which last from three to five separate battles, your party may uncover chests. These chests can contain gold, weapons and armor to equip to your heros and even more cards.

Did you forget that this is also a collectible card game?

You have four heros in your quest party. When you complete a battle, or obtain a card in another way, you can change up who is in your party. With more than 400 cards in the game there is a lot you can customize with regards to who fights in your party, though bear in mind that you must have one fighter from each class in your party. 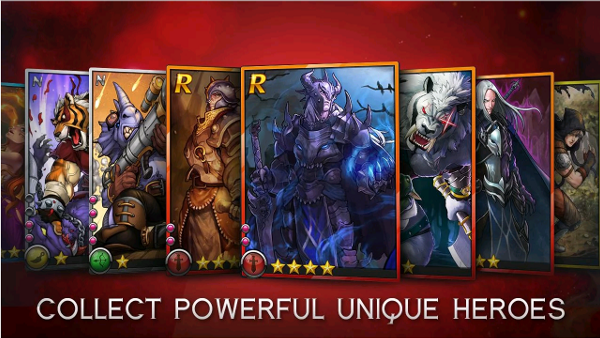 As with many TCGs, you can sacrifice cards to boost the stats of other cards. Selecting your higher level cards, and enahcing them with lower level cards is a good way to boost the level of those cards. These cards can be raised up to level 5, with their attack and HP stats being added to the group when they fight in battles. The higher your stats of course the better you’ll fare in battles, as well as in boss battles and Hellgate fights.

But don’t just go sacrificing all of your low level cards right away, as nearly all cards can be combined to evolve into higher level and more powerful cards. For example if you combine a normal archer (rank 1) with another, you will end up with a (rank 2) archer+. More powerful and with more HP, this card can do you a world of good. Combining two archer+ will give you archer++, and then two of these will give you archer+++. Now if you manage to evolve all the way to this point, and can do so with another specific job class, you will be able to evolve these two normal classes into a rare, and much more powerful, card.

The art in the game, including the character designs on all of the cards is top notch and extremely well done, and the music in the game is also very well done.

Other modes in the game, besides the quest mode, include the Hellgate, which pits an expanded party against a Hell Boss. These monsters are very powerful and may take several attempts to thwart. You can use up to eight warriors in these battles, though only if you have the cost to spend. Think of it like the salary cap in sports. You have a certain number of battle points to use on the battles and each of your characters take up a specific amount of those points. So you may only be able to use a few, depending on how many points you have.

Quest points and battle points are separate values, though they are related. As you play through the quest, each battle will cost you points. Once they are too low you won’t be able to continue until they recharge. It takes one minute for one point to recharge, and the battle points take the same amount of time. So, if you only have 90 points to spend on a Hellgate battle and you spend 80 of them before losing, you will have only 10 afterwards. You’ll have to wait for these points to recharge, or purchase a premium “wine” item to restore them right away.

There is also player-vs-player included in the game, though the mode is pretty much restricted to simming the battles.

I don’t know if it’s the puzzle aspect, or the collectible trading card part of the game but this game is very fun and highly addictive. Prepare to spend way too much of your free time missing calls and ignoring texts from your friends. You won’t be able to put this game down.