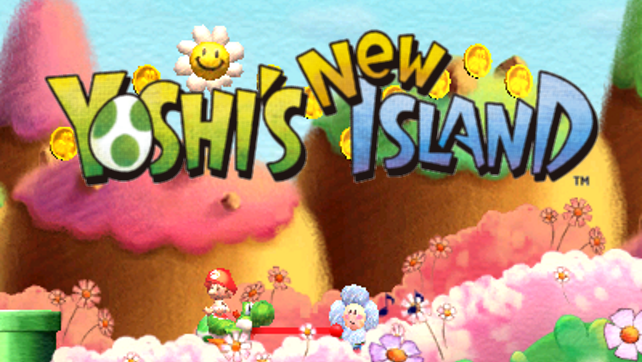 Yoshi is back and he’s bustin’ out the big eggs. Crush your surroundings and create paths with his new Mega and Metal Eggdozers in a new platforming adventure. It’ll take more than egg tosses and flutter jumps to lead Yoshi and Baby Mario through a dangerous new island littered with inventive power-ups. Can you help save Baby Luigi? Yoshi’s New Island will be available at midnight on March 14.

Play as Alex, Marty, Melman and Gloria. Play as one of the lovable Croods. Action-adventure and mini-games. In the Madagascar 3 & The Croods Prehistoric Party Combo Pack players of all ages will get to travel, adventure and explore in the exciting and worldly European locations of Madagascar 3! They’ll also get the ultimate fun of a family party game with Croods-style action as they journey through 30 unique and addictive mini-games.

AR card based match-three puzzle game. Bubble Pop World is a 3D match-three game in which you pop bubbles with the same colors. It is based on Augmented Reality technology, so the Nintendo 3DS AR Card is required. There are 120 puzzle and arcade levels to enjoy, or you can edit more of your own levels and share them with friends via QR Codes. In Arcade Mode you also travel around the world to discover undersea minigames.

This is no ordinary war. This is the war of cubes! Fierce enemies roam the land of cubes, protecting their core and bringing their opponents to mercy. Begin your training with Sir Knight as you take to becoming a Cube Master to tackle these lethal enemies in this strategic and tactical war-game with cubes. Perfect your skills with over 25 Quests to complete in Single Player mode and even more online Multiplayer battles with up to 3 enemies at one time! Trample your enemies and build your army with numerous cubes to earn medals not just for appearances but to equip and advance your army with even more power! The battle for power and position has begun in this tactical game of cubes!
– Unique and strategic war-game with cubes
– Battle against more lethal enemies with online Multiplayer mode and international rankings
– Over 25 tactical Quests to complete in Single Player mode
– Various cubes and fighters with unique combat abilities for thrilling battles
– Multitudes of medals to collect and equip in-game for extra military power!

Learning the alphabet is fun on Lola’s ABC Party! This educational game teaches the alphabet to children while they are having fun! Throwing a party is something that every kid enjoys, and Lola Panda™ offers kids lots of tasks to choose from. It begins with simple word recognition, and graduates to more challenging tasks when the child is ready. This game encourages the learning progress by rewarding children with fun surprises when they achieve success, which engages them in the learning process. Children can decorate the party venue with balloons, or make party foods, and in the end, party with Lola and her friends! The fun they’re having motivates them to continue, and to learn even more!

Get caught up in the tractor beam of this arcade classic! Move right and left to defend against the missiles and attacks of the Galaga aliens and the Galaga Commander. Aliens attack in formations using a variety of attack patterns. Rescue a captured fighter to combine with it, forming a Dual Fighter with twice the firepower! Earn Perfect Bonuses more easily by using a Dual Fighter on the Challenging Stages!

The acclaimed SteamWorld Dig is 50 percent off in the Nintendo eShop on Nintendo 3DS. But hurry, this promotion only lasts until 9 a.m. PT on March 16.

Zen Pinball 3D, Marvel Pinball 3D and Star Wars Pinball are 50 percent off in the Nintendo eShop on Nintendo 3DS. This offer starts 9 a.m. March 17 and lasts until 9 a.m. PT on March 31.

WAKEDAS is a contemplative and thoughtful shape shifting puzzle game with the perfect combination of eye-candy visuals and serene sounds. Radiant multicolored tiles rests on an infinite loop; aim of the game is to group same colored blocks together by simply dragging your finger across the screen.

New DLC Available! All hail to ‘The Warrior Queen,’ the newest CastleStorm expansion. A new class of Viking Elite warrior is at your service and ready for your command as you lead them in a quest for revenge against the infamous Chief Ramhorn!

Originally released in Japan as Super Mario Bros.® 2, this game has previously made only brief cameo appearances in the Western Hemisphere. Mario fans will appreciate the familiar look and feel of the game, while finding that its updated game play creates an entirely new challenge. In addition to the classic enemies already known to fans worldwide, there are also Poison Mushrooms, backward Warp Zones, and the occasional wind gust (which can help or hinder your progress). Players can also choose to control Luigi as the main protagonist. If that’s somehow not enough, expert players can go looking for the game’s secret worlds. So get ready to put your Mario skills to the ultimate test, and save the Princess again. Just don’t be surprised if she’s in another castle!