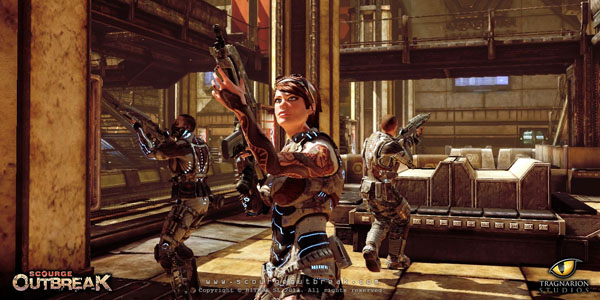 Imagine a game that plays similar to Gears of War, but is a near future sci-fi adventure that takes place at a secret lab on an island. You’re part of Echo Squad, a team sent in to rescue a doctor and recover a chunk of meteorite. With a choice of one of four characters, you progress much in a similar GoW fashion going to each checkpoint and enjoying the story as it unfolds.

Gameplay and progression is quite solid. At first you may feel unsure about this title, but it does quickly pick up. After the tutorial, which I’d recommend checking out, you’re dropped right into an outdoor island location, working your way into the lab. In the general open areas outdoors I didn’t take much cover at first, but I didn’t need to at the very start. When you reach the lab and start making your way inside it takes on a good cover system feel. 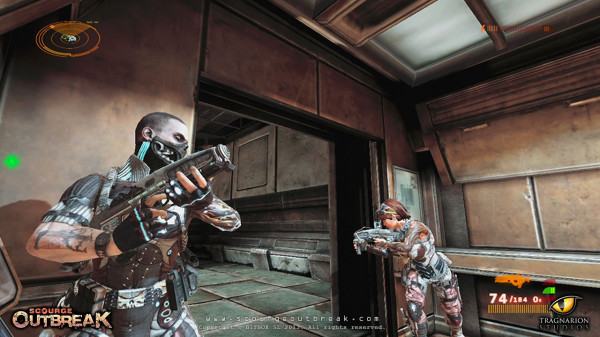 Enemy AI is interesting because you’re never sure what they’re going to do. It’s probably not groundbreaking but it feels creative. Enemies don’t just stand there and take your punishment. They move around, take cover, and in general feel more random than some games do. This is good because you’re not quite sure what to expect. They do tend to react in similar ways when you hit them, reeling from the attack momentarily, but there’s usually enough other enemies to keep you busy in the meantime.

Scourge switches things up too, adding different foes as you progress. The game does keep things interesting, and I think that’s one of the best things it has going. Like GoW, you do actually reach different areas. Things don’t drastically change, but the variety keeps the game fresh. There are even boss battles added in as you get further along. Some of these have specific, or at least tactical ways to win, so you do need to search your area and listen to hints to beat the bosses.

The story does feel like an futuristic action movie, but it’s fun and I tend to enjoy films like that anyway. With your progress focusing on reaching areas and perusing Alpha Squad who quickly seems to go rogue on you, there’s a decent mix of things going on. The occasional time you wander off to fix something to continue on, but that doesn’t go far beyond going through a small detour to flip a switch. 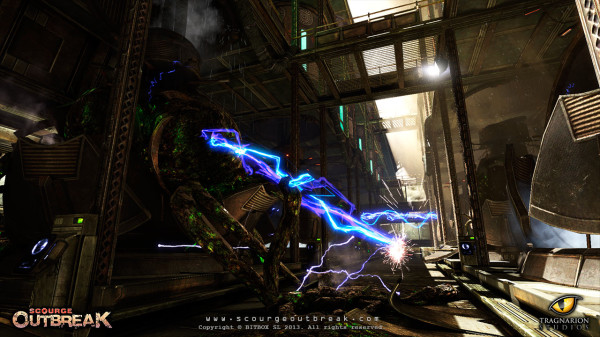 Back to combat, I just found everything to feel fun! Gears of War usually didn’t encourage you to run forward, wilding gunning away. Or at least I was terrible at trying to play the game that way. Scourge: Outbreak lets you get away with that and feel pretty hardcore doing it. You do have melee attacks when you get too close to your foes, and otherwise it’s easy to dodge and get into cover.

Your character does rack up experience points for good kills as well. Mostly these are used to unlock a few bonuses as you continue on. You’re not leveling up for extra health or something, this is mainly a bonus system like we’ve seen in first person shooters these days. It’s a good way of letting you know you’re doing a good job too and that you did take out your latest enemy. 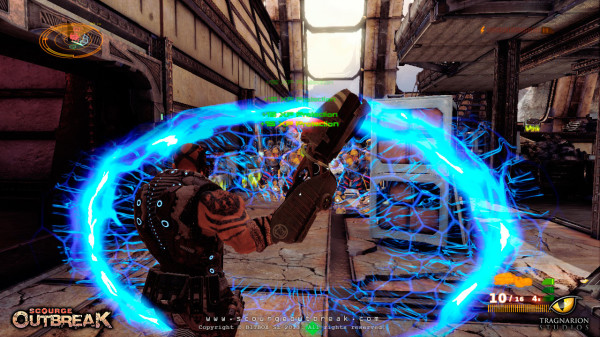 You are part of a squad, which includes three other members besides yourself. I played single player and the friendly AI looked after me well, using their Ambrosia abilities to shield themselves while healing you when you’re down.

Each squad member wears an Ambrosia suit, which allows them to use special abilities. Throughout the game you’ll come across barrels of ambrosia and just by standing near them, your meter fills back up. I played as Amp, the female member of the group. I’m not sure if other players moves vary but Amp was able to throw out a column of light which took out surrounding enemies it bursts near. She can also pull up a personal shield which is useful for saving downed squad members. 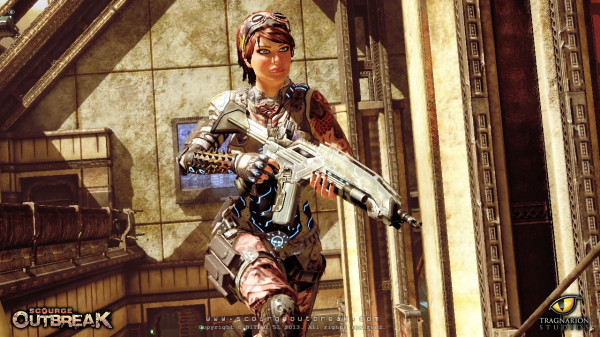 All four characters have flashback sequences as well that occasionally occur. These are just video sequences but they detail a bit more about each character uniquely. So that does give you an excuse to play through the game again, not that I’m sure co-op wouldn’t be a blast anyway.

Considering the asking price of only $10, which is quite decent these days as Xbox Arcade titles have increased in complexity and content becoming occasionally larger priced titles. Scourge: Outbreak delivers an enjoyable adventure with fun combat mechanics at a good price. The important thing I found is the variety as you progress. Sure there are only a few types of enemies but they do get mixed up between the alien like monsters you’ll encounter, and soldiers you’ll be battling. But there are timed sequences where you hold out while your area is besieged, and others where you’re encouraged to progress as a seemingly endless wave of enemies progresses on you. Mind you they may not be endless, but it is a good enough wave to make you feel pinned down and needing to press your attack forward. 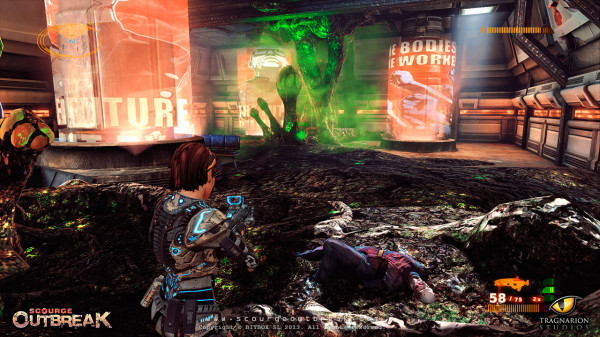 The only issue I had was that some ammo piles you come across don’t have the ammo your current gun uses. This could just be a way to get gamers to switch up their gear so they don’t just stick with one weapon however.

Scourge: Outbreak is an enjoyable third person shooter. I didn’t feel overwhelmed, nor did I feel over powered. Odds are you won’t get wiped out often, but that’s up to you taking a step back and letting your health regenerate in cover so you don’t burden your team. If you’re unsure, give the demo a try. You might be surprised by just how much fun this title is!