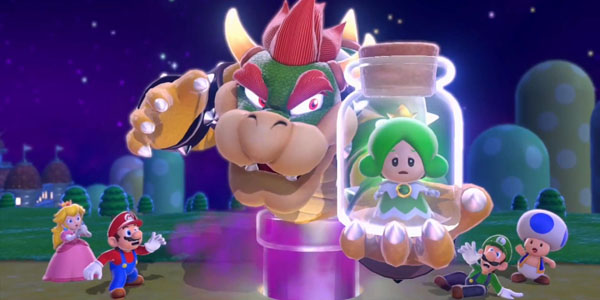 I figured I’d enjoy Super Mario 3D World, but I didn’t realize how much fun it would be until I got into it. Throughout the game there is a lot of nostalgia mixed with newer style gameplay. In a lot of ways the game reminded me a lot of Super Mario Bros. 2, the US version. I’d actually originally gone in wishing this was a sequel to that part of the series, caught up with playing as the four heroes again that starred in the US remake of Doki Doki Panic. However 3D World quickly won me over and made me forget that dream for another day.

The adventure starts off with Mario, Luigi, Princess Peach and Toad running off to save the Sprixies, these little fairy people who honestly reminded me of the citizens of Subcon. Bowser has captured them and taken off to their kingdom. You’re dropped off as your chosen player character on a open map you can wander and search for coins on. Sure it’s similar to Super Mario Bros. 3 with paths between levels, but you can actually wander off of those in this one.

Levels task you with finding three green stars as an added challenge, and a collectable stamp that you can use to post to Miiverse with. I’m not sure if the stamps only work in game, or are added to some sort of collection, but it is something fun in game at least. As with Super Mario Bros. U, gamers can leave behind messages on the map screen for others to enjoy. In 3D World, you’ll actually approach Mii’s on the map and when you’re close enough, their message will pop up. At the end of each level is a flag pole, much like classic Mario games. 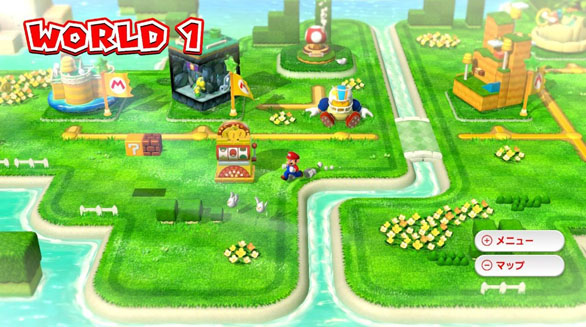 There is quite a lot of variety between levels, and as you progress that becomes even more diverse. One of the newer additions that is reminiscent of the penguin sliding races in Super Mario 64, is the inclusion of Plessie, a Yoshi like version of an underwater dinosaur. You’ll travel along waterways and bounce off enemies to reach higher areas as you control Plessie. There are a decent few of these levels, so this new character is put to good use. 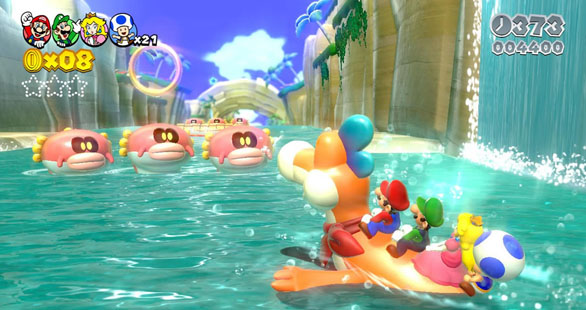 Of course the big draw for 3D World is the cat suit which does give you quite a bit of power. You’re able to climb up most walls for a decent amount of time, including even background walls in more 2D sections of the game. It’s actually funny to realize that you have that option when you’re traveling through underground areas. Combining Princess Peach with the cat suit is definitely the games strongest platforming option. Her floating ability, mixed with being able to grab onto walls really makes it easier to progress. The cat suit also allows your character to scratch and pounce, making it easier to get through groups of enemies.

Bosses do feel mostly original, but I havn’t played through Super Mario 3D Land yet, so I’ll know for sure later on. Boswer for example, drives a custom car in a few levels, while standing in the trunk and attacking you as you progress onward slowly chasing him. Another pits you against a joker that can summon blob monsters to form a giant joker blob. These at times can be somewhat challenging, but most gamers will figure them out and progress in a try or two if they do fail. Unfortunately the bosses are reused later in the game, which is a shame since this title does have a lot of creativity behind it. 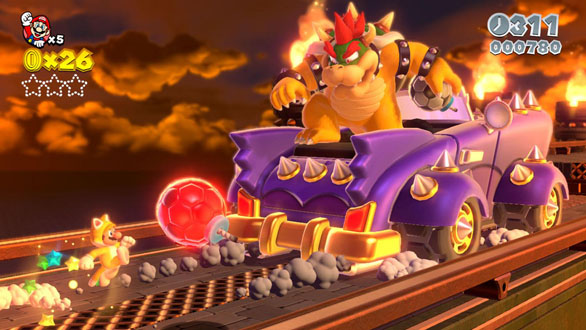 Graphically the game is absolutely beautiful! Sharp graphics capture a high end Smash Bros sort of quality to the look of the characters. It’s easy to get caught up in playing the game and not really noticing just how great it looks, but when you’re watching someone else give it a go you get a chance to really appreciate the visuals.

Overall the 3D layout of the game feels very natural. It’s not really like Super Mario 64. The game itself feels more like playing the 2D platformer Mario games, but with more depth. That’s not to say you won’t be running off into the distance, but it’s more of a straight forward journey with lots of secrets to discover along the way. There is a time limit like most platformer Mario titles, as well as a set number of lives. There are mini games in levels to earn more stars and different challenges on the world map. One such challenge features you playing as Captain Toad, a character who cannot jump, but is at least super sized at the start of the level. You’re given the task of finding five stars in his levels, while rotating a stage within a box. It’s platforming action, but you need to find ways to get up to, or drop down to the stars you’re collecting. 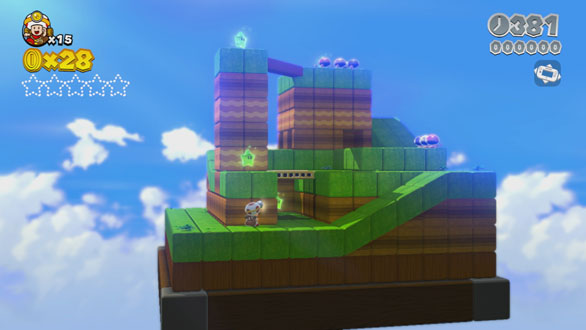 The Mystery Houses are another fun challenge which gives you about ten seconds to puzzle out how to reach the star in each area you’re dropped in. These and enemies blocking the paths between levels add some variety to your usual progression. Again, skip to the next paragraph to avoid spoilers. There is also a lot of challenges in replaying levels after you’ve cleared all the main game worlds. 3D World actually features two extra challenge worlds (it seems, I only made it to the first) and a special Star World that takes place after the final battle.

I appreciate that this game progresses the circus theme the Koopa army sometimes has, but I do really wish there was a story here. Super Mario Galaxy did a wonderful job of showing that Mario games can include a great story, and unfortunately 3D World doesn’t even have letters or such at the end of worlds like Super Mario Bros. 3 did. Hopefully this changes again in the future. Galaxy had a great story, and the Mario and Luigi RPG games have colorful tales as well. It would be great to see more storytelling introduced into these platformers.

Considering that’s the only flaw here, and it is nitpicking, the game does stand out as a wonderful title to own for your Wii U. I played every level leading up to the final battle, and it probably took me around ten hours which is decent considering I’ve played games for most of my life. There was still more to go, and a few past green stars to collect. That and to be fair, Princess Peach was probably the easiest choice to rush through the game. Stars are needed to unlock some levels, so it is a good idea to collect as many as you can, but not all are needed to complete the main adventure. If you want all the stamps too, you’ll have to beat the game with every character (or presumably four players going through all the levels together) so that definitely adds replay value. 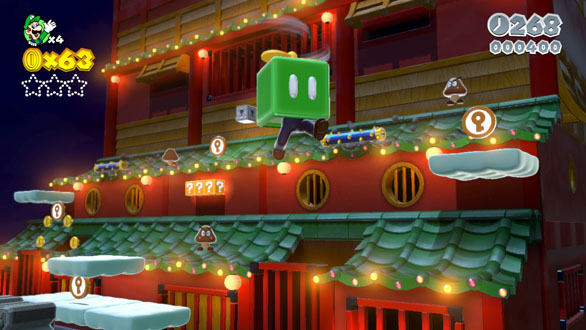 There are a good mix of fun surprises throughout and the variety of levels keeps things interesting. The only thing I wish is that Nintendo would stop teasing me! I know, I’m one of like three people who probably want a Doki Doki Panic sequel, but this game even reintroduces the slot machine with those Subcon like Sprixies cheering you on. I realize Doki Doki Panic isn’t really part of the Mario series, but no one has told Shy Guy that. If Bowser can survive everything under the sun, and Wart was technically only killed in a dream, I think it’s about time for a sequel. Until then, this is an awesome title that is very satisfying. 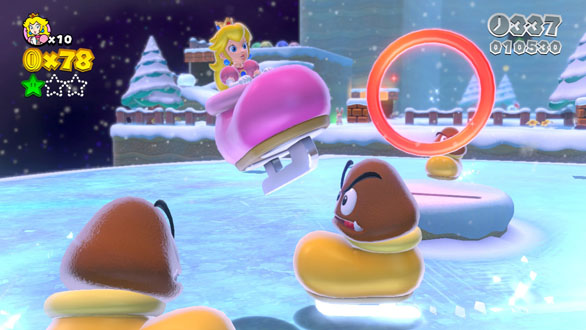 Lastly, one of the coolest additions to the game is Ghost Mii’s. They are actually Mii’s that play through a level you’re replaying along with you. This is a fantastic way to get some hints on where those missing green stars are that you haven’t found and best yet, the game seems to focus on favoring your friends play through data! So often you’ll see a name in yellow, and yes, that is actually data from someone on your friends list and how they originally played through the level.