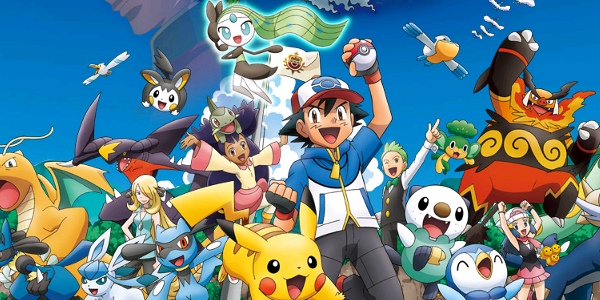 Starting on Nov 28th, you can follow the epic journey of your favorite Pokémon Trainer, Ash, in Pokémon: BW Rival Destinies on Nintendo eShop! Ten episodes from Pokémon: BW Rival Destinies, the Pokémon animated series, will be released on Nov 28th and then five more episodes will be released every week until Dec. 26, so be sure to visit the Nintendo eShop every Thursday to see what new adventures await Ash and his friends!

Experience the Louvre without even leaving home with an official guide in 3D! Explore one of the greatest museums in the world without ever leaving your home! Get up close and personal with each work of art through official photos, videos, and audio interviews with museum curators. Discover the Louvre’s collection on a guided tour of specific masterpieces, or customize your own virtual walking tour through the museum. In addition, certain masterpieces are viewable from different angles with special 3D photos and videos. Going to Paris? Enrich your visit to the Louvre museum and carry your Nintendo 3DS™ Guide: Louvre with you for official in-depth commentary as you walk each wing. With all this and more supplemented by updates through the SpotPass™ feature, you’ll always have an up-to-date audio and visual guide to the world’s most legendary art collection!

Gear up for ultimate speed! Gear up for ultimate speed in Super Hang-On. Tour through 48 challenging tracks on four continents and discover the rush of true arcade game play as you blaze through checkpoints in a race to beat the clock and your competitors. Experience the thrill of street bike racing and earn your place at the top of the scoreboards in this must-have classic. In addition to its all-new 3D presentation, 3D Super Hang-On also features Tilt Controls and a Moving Cabinet mode!

Space is your battlefield! As a resourceful, extra-terrestrial warrior, your mission is to save the peaceful Land of the Dragons from vicious creatures. Aided by the dragons, you must use every trick in the book and every skill at your command in order to stave off these alien invaders and save the day! In addition to its all-new 3D presentation, 3D Space Harrier also features touch control functionality and an Arcade Cabinet mode!

Play as a farmer in the savanna! Raise dozens of exotic animals. Cultivate your own land! Play as a farmer in the savanna! Buy new animals, feed them, care for them and make your African farmyard a happy one to unlock lots of bonuses. Cultivate your land to feed your ostriches, and gather their eggs to sell at the market. Giraffes, lions, elephants, crocodiles… make your farm prosper like a real farmer! Customize the name, size and color of your farm and animals, and trade your animals with those of your friends.

Test your metal, take in the sights, and race to win! Race in full 3D with famous cars. Test your mettle against other drivers through treacherous tracks across three continents. Choose one of the 10 Vehicles to drive. Take in the sights as you cruise through the famous landmarks in Asia, Europe and the United States. Challenge yourself with three distinct modes, Challenge, Time Attack and Two player battles.

One Will Rise. One Will Fall. One Will Die. Experience an epic adventure that answers unsolved questions and includes never-before-seen action. Assemble your team, level up and customize your characters while traveling the globe in search of justice. Play as 16 different heroes and battle 12 devious villains; Experience the dramatic events between seasons through a brand new original story; Be mentored by the best–Batman, Superman and more

Clear Ryu’s name and restore his honor in the final chapter to this classic series! Join master ninja Ryu Hayabusa, last member of the famous Dragon Clan, in the third and final chapter of the legendary Ninja Gaiden saga. Ryu is framed for FBI agent Irene Lew’s murder, and it’s up to him to clear his name. Defeating superior life-forms created out of “life energy” called BIO-NOIDs and avoiding enemy ambushes are among the many obstacles which Ryu faces in this unpredictable adventure of mystery, deceit, and destruction. Ryu’s techniques have improved from last time—his ability to grab on to horizontal surfaces, his reduced falling speed and altered jumping maneuvers, as well as using power-ups give Ryu that extra advantage against his foes. Help Ryu defeat the forces of evil once more and discover the real culprit behind Irene’s death as one of the most loved trilogies in video-game history comes to a close!

Two men will rise to the challenge and face the wrath of the alien invaders. In the year 2636, the alien war continues on and it’s up to two soldiers, Bill Rizer and Lance Bean, to put a stop to the alien invasion. The aliens have ravaged the Earth with their powerful organic and technological weapons. Players can join with a partner and battle through 6 stages of non-stop run-and-gun action collecting power-ups including bombs, flamethrowers, spread shots, lasers and machine guns to take out the aliens. Bill and Lance travel through war-torn cities, on air bikes, riding missiles and ultimately into the alien base to defeat the alien boss once and for all.