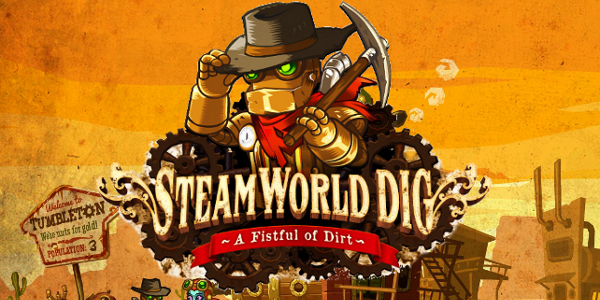 SteamWorld Dig is a beautifully entertaining game that is simple to pick up and play, but complex enough to add thought-provoking and challenging gameplay. Smart and well designed, this game is a must-have for any 3DS owner.

The game starts with the character Rusty heading back to his hometown of Tumbleton; no sooner than his arrival the ground gives way, and he falls into his uncle Joe’s old mine. He soon meets Dorothy, who leads him to his uncle. There, Rusty gets his first pickaxe and begins his journey. 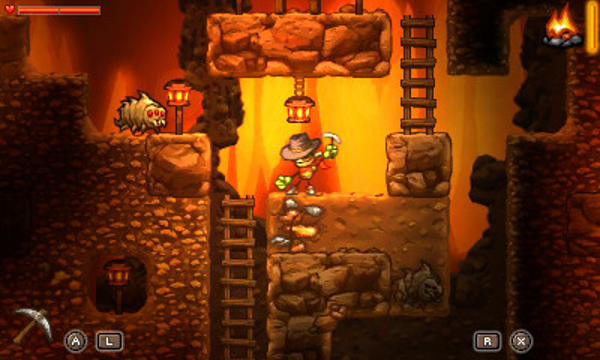 The mechanics of SteamWorld Dig are pretty simple, as is the objective. You dig. As you dig your way down into the mine you’ll soon uncover gems hidden in the sand and rock. You can bring these back to Dorothy and trade them in for money. You can then use that money to buy upgrades for your pickaxe as well as a bunch of other things later in the game.

While the basic structure of the game is to dig down, there is a fair amount of strategy involved. You can swing your pickaxe to break blocks on either side of you, below your feet, or directly above you. You can’t swing your axe while you’re jumping, so if you dig yourself down too low and then see a gem out of reach you’ll have to find another way around to it.

As you make your way down you will also encounter blocks of stone which can’t be broken that you’ll have to make your way around. Be careful not to break the ground below the block or it will fall. Standing below a falling block isn’t a good idea either.

Later on you’ll also come across explosive barrels which blow up if you stand near them too long. There’s also blocks dripping corrosive acid, and mushrooms you can bounce on among other goodies. 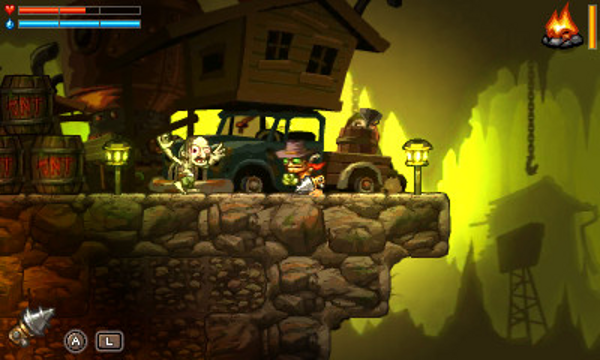 You’ll encounter a variety of enemies buried in the ground and in open pockets below the ground. Early enemies merely move back and forth and can be defeated easily enough. Later enemies throw dynamite at you, throw bottles of acid your way, and there are even large metal spike shooting turtles to deal with.

This is some crazy mine.

Rusty is pretty spry despite his name. Make your way down and want to head back up to the top? A quick wall-jump is all you need to scale the wall and climb back up.

There are a bunch of helpful support robots in town too. Cranky runs the shop in town and can sell you upgrades to your pickaxe, a bigger pouch for holding the gems you uncover, and more. You can purchase items like a ladder to give you a boost; a stick of dynamite to clear a few blocks at once (or pesky enemy); and even a teleporter so you won’t have to go all the way to the top of the mine–these are just a few things you can buy.

Deep in the mine you will also find caves with new technology hidden inside. A steam jump is an early example of what you’ll find, but you’ll also get a drill, shoes to run faster, and more. 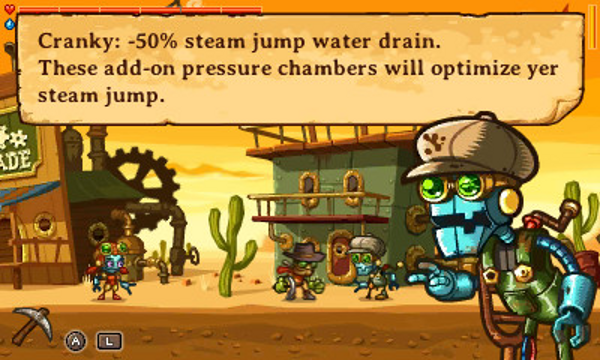 All of this happens while Rusty is fighting against time. Since he is underground he only has a limited amount of light, which is slowly dimming. Defeating enemies may give you a boost of light but you’ll eventually have to make your way back to the surface to refill your light meter.

SteamWorld Dig controls beautifully and is a breeze to play. The controls are intuitive and the game plays great. The art in the game is top notch and looks fantastic. The sound effects and music in the game is also very well done and add to the atmosphere nicely.

Another great touch are the randomized worlds. Did you push through and beat the game? Play again and it’s like a whole new digging experience.

If you own a Nintendo 3DS and enjoy platforming games and exploring, then you need to get this game. It is the perfect portable title that can be easily played in short bursts, but can also capture your attention for hours on end.