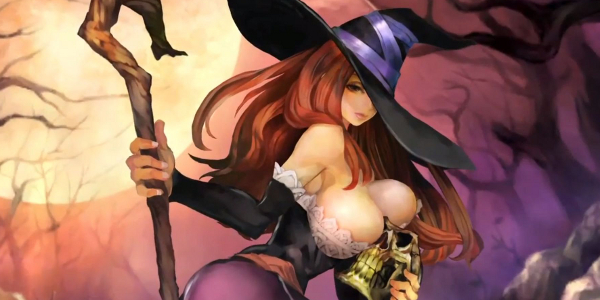 Final Fight, Knights of the Round, The Punisher, The Simpsons, Teenage Mutant Ninja Turtles, X-Men, Golden Axe, Double Dragon, and of course, Dungeons & Dragons: Shadow over Mystara . . . any of these titles bring back memories–preferably fond ones? The beat’em up, as it’s so aptly referred to, is a genre that had its heyday in the ’90s, when arcades were still a thing, TGIF was the best damn night in television, and Star Wars: Episode I had yet to ruin everything. It was a genre, along with fighters, that dominated my childhood, and while the past few years have been kind to fighting fans, fans of  beat’em ups have had to sift through digital offerings for some of that mind-numbing, side-scrolling action.

Vanillaware, a purveyor of 2D games, such as GrimGrimoire, Odin Sphere, and Muramasa: The Demon Blade, has taken it upon themselves to fill the retail release void with Dragon’s Crown (hereafter DC), a stately entry in the beat’em up genre, that also features a heaping of role-playing game elements, making the aforementioned Dungeons & Dragons: Shadow over Mystara its biggest influence. 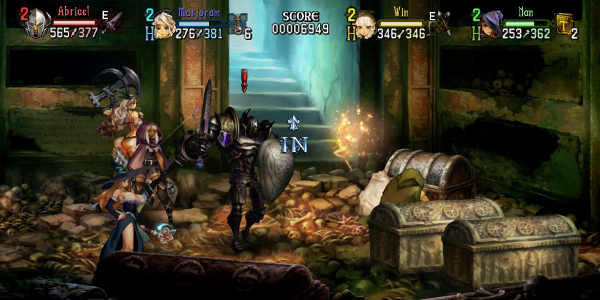 DC opens at Dragon’s Haven Inn, a tavern you’ll frequent during your adventures. It’s here where you’ll choose a character, set your party, and report your progress. The characters available are all visually, and mechanically, distinct: an ironclad Fighter, who’s a sword and shield favoring behemoth; the Sorceress, a witch who prefers to support the party, not so much her back; a Wizard, very much interested in melting faces; the Dwarf, a duel-wielding, goblin-chucking ball beard; the Elf, who’s fey, swift, and a rumored Hunger Games fan; and finally, the Amazon, a warrior that consists exclusively of brawn, butt, and boobs. She’s also adept at sundering skulls with her ax.

A few color schemes are available for each character, and you can change their name as you see fit. Japanese voices are also available if that’s your thing, but only for your character. The remaining voicework is strictly in English.

After you’ve settled on your character, a tutorial awaits (which can be skipped for the subsequent playthroughs), and it does an adequate job of walking you through the basics. You’ll also meet Rannie, a rogue; he’ll accompany you throughout the game, and you can direct him to unlock chests or doors, while you focus on combat.

Leaving the tavern, you’ll have a town to explore, though its faculties, such as the Temple, Magic Item shop, and Stable, aren’t all available at the start. Locations open as you progress the story, and additional tasks are doled out at the Adventure’s Guild, where you can learn skills (class specific and common) and accept quests.

The main story focuses on the eponymous Dragon’s Crown, which allows its wearer to control dragons (of course). It all comes across a bit boilerplate, and it never strives for anything more. A narrator with an earnest delivery breathes some life into the tried and true material, though the narration is limited to the main quest only, so if you find yourself focusing on side-quests, you’ll hear a particular phrase uttered repeatedly during your comings and goings in town, until you move onto the next story segment.

Fortunately, your comings and goings are consistently in gorgeous environments, populated with detailed secondary characters, and great interpretations of classical monsters, all with a multitude of influences sweeping throughout. DC references everything from The Nude Maja to Tinker Bell; Renaissance portraiture to Frank Frazetta’s paintings; Jason and the Argonauts to Monty Python and the Holy Grail; and more. George Kamitani, Director, takes what should be an incongruous mixture of styles and creates something cohesive. It’s pretty impressive stuff. 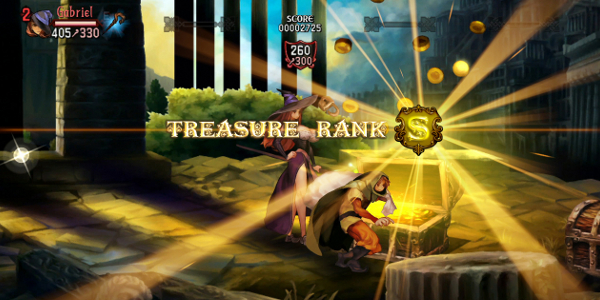 They’re nine stages to conquer, and each has a branching path that becomes accessible after reaching a certain point in the story. Along with the two paths, you’ll uncover secret passages and various quest specific situations as well. The locations vary from moss enveloped sanctuaries to desolated catacombs.

It’s great the stages are engaging and fun to play through, because you’ll revisit them, a lot, either for quests, or because the main story requires it. And, you won’t have to do it alone. DC allows for four player simultaneous play, both local and online, although online play is initially locked. You’ll have to unlock the stables to access the network, which is going to take around five hours.

Though, perhaps you have friends, but they’re lame, and don’t like beat’em ups. Thankfully, you still don’t have to go it alone. You can set the three player slots to AI controlled companions, and they’re competent, for the most part. It may become a bit maddening to see them stroll into traps, or not effectively use items in their possession, but I’ve seen my friends do this too, so I’ll cut my artificial ones some slack.

To keep the AI companionship fresh, you’ll find piles of bones in the dungeons, which you can bury at the temple, or pay a fee, and resurrect instead. The resurrected characters will then wait for you at the tavern, all with varying gear. Even better, players you encounter online may be resurrected as well, meaning you can play offline with your friend’s toon. It’s cool to know that someone may have resurrected you, and are questing with your character while you’re at work thinking of playing Dragon’s Crown. 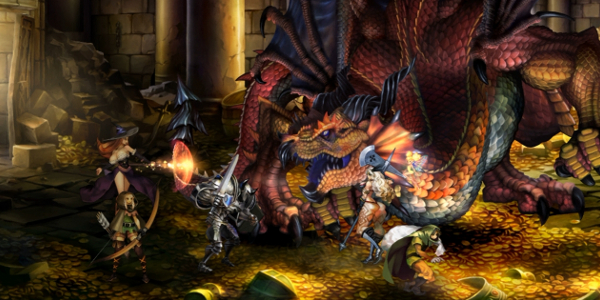 It’ll take around 15 hours to complete the game on normal, and after doing so, you’ll unlock hard mode, which increases the level cap to 65; after you complete hard mode, you’ll unlock the final difficulty level, and raise the cap to 99.

What’s the point of grinding a character to level 99, when you can start the adventure anew with a different class? Loot. What else? When it is all said and done, DC’s draw is loot. Chests are scattered about the levels, and contain treasure which vary from E, the worst, to S, the best. Completing stages and defeating bosses not only yields experience points, but more loot as well.

Multiple bags can be purchased, meaning you can create different loadouts, which you’ll need, since having gear with the proper attributes is important as difficulty increases; plus, gear breaks down with usage, and if you don’t have back-up bags available, your S-Rank ax may be in no condition for another round, meaning you’ll have to return to town, annoy your friends, and miss out on an amusing cooking game.

If you’re on the fence which version to buy, I wish I could say there’s a clear winner, but there isn’t. Graphically, they’re virtually identical, with the Vita version susceptible to noticeable slowdown when the action heats up with four players. The OLED screen makes a pretty game even prettier, but it’s also small, so losing track of your character is going to happen.

But, the Vita version benefits greatly from the touchscreen. There’s additional treasure hidden in the game, identified by glints; if you’re playing the Vita version, you just tap the glint, and the treasure pops out. Runes eventually become available, and their magical properties can only be tapped by, that’s right, tapping them. Also, if a player dies, and they’re out of life points, you can spend gold to reanimate them, but you have to tap their portrait to do so.

How does the PlayStation 3 version compensate without touch controls? A cursor, which you manipulate with the right thumbstick. It is cumbersome to use, even when there isn’t any action unfolding. But, having to fiddle with the right thumbstick, mid-battle, to bring your partner back to life? Urgh. Casting rune magic by moving it over three separate runes, spaced apart, while skeletons are hammering you? Double urgh.

In that sense, the game feels designed for Vita, or at least a controller with a touchpad (come on DualShock 4).

Of course, you can’t play local co-op on a Vita, and if you have a roommate that’s into these games, I’d deal with the cursor, and play it on PlayStation 3. Also, slowdown isn’t an issue on PlayStation 3, and if you’re sensitive to frame drops, the Vita version may be too much to bear. 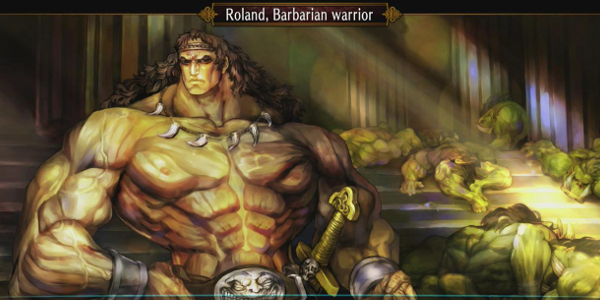 Dragon’s Crown is a rarity: a 2D side-scrolling beat’em up, with an unabashed artistic style, that’s long. It isn’t concerned that it’ll take dozens of hours to complete with a single character if you wish to tackle all the difficulties; it doesn’t care that you may be offended by the art; and it certainly isn’t going to apologize if you don’t see the appeal of grinding levels until it’s simply time to go to bed. And it’s all the better for it.