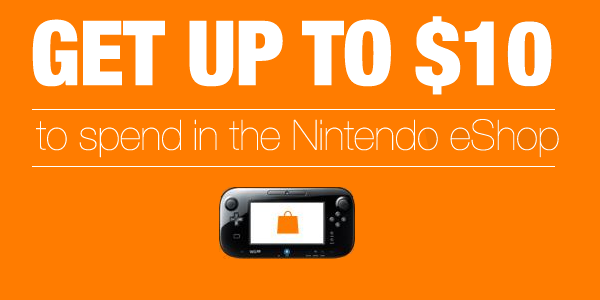 Nintendo has an eShop promotion running right now but you’d better act fast as it’s only running for the weekend and ends on Sunday.

Beginning now through July 28th, add qualifying funds to your Wii U Nintendo eShop account and Nintendo will throw in up to $10 in eShop credit. Here’s how it works:

Step 1
Access the Nintendo eShop from your Wii U console.

Step 3
You’ll get an email with your Nintendo eShop promotional code on August 2nd! (Be sure your Nintendo Network Account email address is correct by viewing User Settings on your Wii U system.)

The big N has a few big releases for the Wii U on the horizon with this promotion coming just before the release of Pikmin 3 two days later. Also coming soon to the Wii U are Rayman Legends on September 3rd and The Wonderful 101 on September 15th.