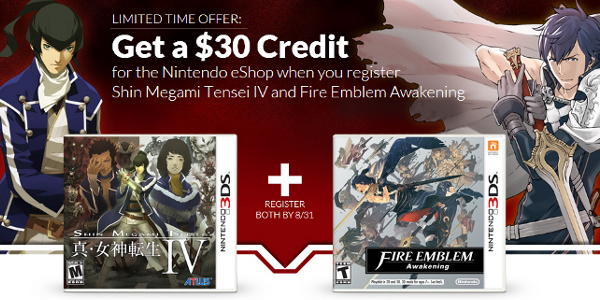 The heavily anticipated Shin Megami Tensei IV will arrive in stores and on the Nintendo 3DS eShop on Tuesday. We’ve played the game and it’s fantastic. Click the sidebar for our review of the game.

Also hitting the eShores are a couple of Virtual Console titles on the Wii U in the original Metroid and Donkey Kong. Down the way of the 3DS you can also go retro with another serving of the Mario game. Super Mario Bros. 2 is this week’s helping.

The upcoming Dreamworks Picture Turbo has its very own game on both the Nintendo Wii U and 3DS. The game hits retail and eShop on Tuesday. Also after the Marvel crew got their own virtual tabletop game, the Star Wars franchise gets its own version of Pinball. Take a look at Star Wars Pinball on the Wii U.

Turbo: Super Stunt Squad is a high-velocity action game featuring the super-charged crew of characters from the upcoming film. Each playable character has their own signature street style and tricked-out skills which will come in handy when showing-off and earning respect with super-cool stunt moves. Expert skills will also prove useful to earn power-ups, customize your character, win competitive challenges and discover shortcuts in the dynamic larger-than-life environments of Turbo’s world. Turbo: Super Stunt Squad™ will be available on July 16.

Feel the power of the Force in Star Wars Pinball! Set in a galaxy far, far away, each of the tables in this brand new pack lets you interact with the most iconic characters, and relive the greatest moments of the Star Wars universe: Star Wars: Episode V The Empire Strikes Back, Star Wars: The Clone Wars, and Boba Fett. May the Force be with you! Influence the Balance of the Force! Join either the Light Side or Dark Side and take part in the epic struggle by simply posting scores for your chosen side! Full list of features: -Three brand new tables: Star Wars: Episode V The Empire Strikes Back, Boba Fett, and The Clone Wars -Compete against other players to achieve the highest ForceScore™, and team up with your friends to increase your TeamScore™ -Exciting multiplayer modes, including local split-screen and hotseat multiplayer -Worldwide Tournaments -New tables released regularly through the Nintendo eShop for Wii U™ -GamePad support!

The first installment of the immensely successful Metroid series introduces us to the hideous title creatures and the slick, cybernetic bounty hunter Samus Aran. As Samus™, your mission is to penetrate the space pirates’ home planet, Zebes, and keep them from destroying the galaxy with the dangerous life forms known as Metroids. Metroid has all the high-tech weaponry, creepy tunnels and crawly alien creatures that anyone could ask for. With its deep and complex game play, excellent music and a rare sense of setting, it establishes a frightening ambience that will haunt and entertain you for a very long time.

Donkey Kong has kidnapped Pauline, and it is up to Mario, the fearless carpenter, to come to her rescue. Throwing fate to the wind, Mario tries desperately to climb the labyrinth of structural beams from the top of which Donkey Kong taunts him. Help our hero ascend the metal structure by dodging an assortment of fireballs, steel beams, and exploding barrels the angry ape hurls at him. Prepare yourself for a never-ending adventure as Donkey Kong takes Pauline away to the next level every time Mario gets to the top. Based on the arcade game of the same name, this classic will keep hardcore and casual gamers entertained for hours.

Chosen by the Gauntlet, YOU are the Samurai who will explore paths of law & chaos, and decide the fate of the world. The Eastern Kingdom of Mikado is a city of the chosen, sitting on high and protected all around by towering walls. Yet its people are at risk from an ongoing demon threat that the player as a newly appointed Samurai is duty-bound to fight against. Throughout the player’s journey, they must choose their own path. The choices will affect them, other NPCs, and the overall outcome of the story. Decisions the player makes throughout the course of the story will have lasting repercussions, as the fate of the world hangs in the balance. Shin Megami Tensei IV, the next entry in the well-received role-playing series, will be available on July 16.

Turbo Charged Action! Turbo: Super Stunt Squad is a high-velocity action game featuring the super-charged crew of characters from the upcoming film. Each playable character has their own signature street style and tricked-out skills which will come in handy when showing-off and earning respect with super-cool stunt moves. Expert skills will also prove useful to earn power-ups, customize your character, win competitive challenges and discover shortcuts in the dynamic larger-than-life environments of Turbo’s world. Turbo: Super Stunt Squad will be available on July 16.

Mario, Luigi, Princess Toadstool, and Toad embark on a quest together to save the day against the villainous Wart. Pick up items and throw them at your adversaries to clear levels in seven fantastical worlds. Even enemies can be picked up and tossed across the screen. Each character has a unique set of abilities: Luigi can jump higher and farther than any of the other characters, Toad can dig extremely fast and pull items out of the ground quicker than anyone, and the princess is the only one who can jump and hover temporarily. This unique installment in the Mario series will keep you coming back for more!

Get $30 credit to spend on Nintendo eShop

Get a $30 credit for the Nintendo eShop when you buy and register two amazing games: Fire Emblem Awakening and Shin Megami Tensei®IV. To take advantage of this offer, simply purchase both games and register them at Club Nintendo. Once you’ve registered the games and completed the surveys, you’ll receive a code for a $30 credit in your Nintendo eShop account. It’s that easy! Hurry – games must be registered by Aug. 31.