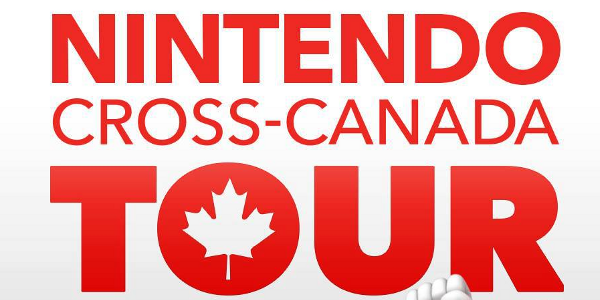 Nintendo is taking the Wii U and Nintendo 3DS coast-to-coast across Canada on a cross country tour this summer. The company will have a large number of new games on display and playable to those in attendance, including New Super Mario Bros. U, LEGO City: Undercover, Luigi’s Mansion: Dark Moon and the new Donkey Kong Country Returns 3D.

Plus, fans will get the chance to try all of the new titles being released this summer, including Animal Crossing: New Leaf, Mario and Luigi: Dream Team, Game & Wario, and Pikmin 3.

From the Maritimes, Greater Toronto area, through the Prairies all the way to Vancouver Island, now is your chance to bring the Nintendo experience to your town! Make sure to “Like” Nintendo of Canada’s Facebook page for your chance to participate, and keep your eyes open for the polls throughout the summertime: facebook.com/nintendoofcanada

Also part of the tour are photo oppertunities with where you can choose your favourite Nintendo-themed prop, snap a photo in our photo booth and share it with friends. There will also be a Cross-Canada Tour Prize Wheel for your chance to win some Nintendo swag before you leave, including T-Shirts, candy, and photo frames. There may even be a mystery prize or two.

Check out the tour dates so far below:

*Entry fees to these events may apply.