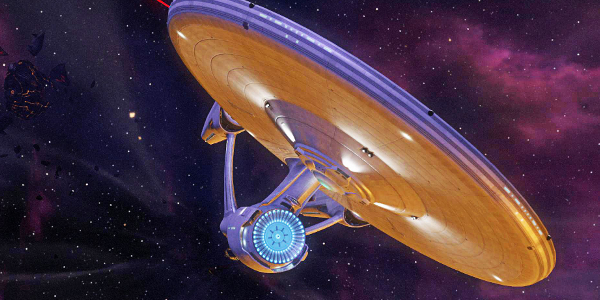 Star Trek looks and feels like the movies and sucks you into the action. The game, with the voice actors, music and visuals so much like the franchise itself, is very satisfying despite some of the minor troubles.

First and foremost the game is built to recreate the feeling of watching and playing right along with the latest Star Trek movie. The visual presentation, musical score and the actors are all true to the 2009 film. All of the original cast members from the newest films lent their voices to the game.

Star Trek features an original story and includes the return of a classic Star Trek villain that hasn’t been seen since The Original Series, the Gorn. Vulcan scientists are working on a new device with the hope to quickly teraform a new planet to be the new home for the Vulcan people. Something goes wrong with the device and it creates a tear in space, from which comes the Gorn. As the crew of the Enterprise work to rescue the survivors and uncover what happened in the accident, the Gorn steal the device which threatens the safety of the entire Federation. Kirk and Spock must work together to recover the device, as they uncover that there is more to the story than it seems.

The game features co-op gameplay, which is pivitol to the story. If you have a friend with you the two of you can play the game together. If you prefer to play the game solo that is an option as well. Simply pick Kirk or Spock as your preferred character and your partner will be controlled by the computer. 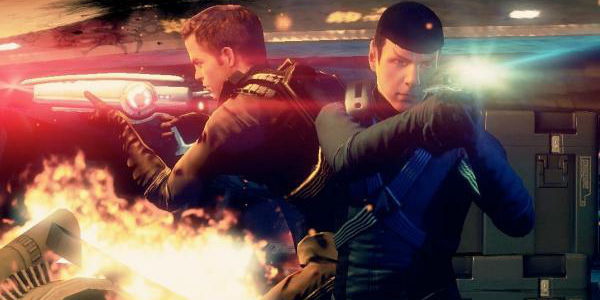 The game was built with the co-op gameplay in mind with several parts of the levels being impassible alone. Whether it be getting a boost to a higher ledge, working together to pry open doors, or taking two different vantage points in defeating an enemy, the gameplay is exciting.

The partner aspect of the game is very helpful in dispatching enemies. If you’re being bombarded you can rely on your other half to do their part in taking out the enemies. But the co-op gameplay is also where the game can be frustrating, if you’re playing the game alone with a computer controlled partner.

For the most part your partner will follow you around pretty closely, though you can direct him to pick up certain items, move to strategic locations, or attack enemies. If you manage to rush through a section of the level and leave your partner behind the game will usually respawn him right where you need him, giving you a boost or helping pry open a door.

There were multiple times when my partner was not pushed up where I needed him to advance the story, leaving the blue ‘awaiting partner’ on the screen. And where is that partner? Nowhere to be found.

I was left standing and waiting and no amount of calling my partner would make him budge. Even going back to where he was standing around wasn’t enough to coax him to follow.

One time it was because he had spawned incorrectly and was stuck, not attacking any enemies (nor being attacked). Another time he stood trying to run into the wall instead of ducking into the duct. A third time the game spawned my partner behind the door that needed to be pried open by both Kirk and Spock. All three times I had to reload the game from the last checkpoint to continue.

Aside from these technical blunders the game is great fun to play.

You have two different options with your weapons, stun and kill. Stunning temporarily stuns your enemies, allowing you to then physically take them down non-lethaly. This is actually required at times to attain Federation commendations. Killing infected Enterprise crew members who are being controlled like zombies wouldn’t be befitting of a Starfleet captain.

Commendations are awarded for meeting certain conditions in the game, which can include using stealth in missions and not being seen by your enemies. It’s not required, but can give an extra challenge to the game instead of just running and gunning.

Another neat feature is the tricorder. With a quick press and hold of the shoulder button you can view the entire environment through a scan of the tricorder. With this view you can unlock doors, activate switches and access panels, which can do things such as disabling turrets in enemy territory. It’s also useful to see where your partner is when you aren’t together. 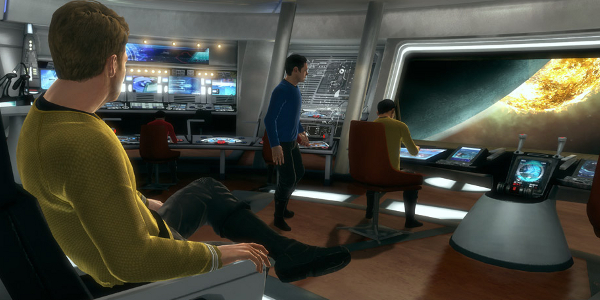 The tricorder can also allow you to do a wide array of things when you upgrade the device throughout the game. You can heal your partner, hide fallen enemies, send distraction sounds to confuse the enemy and more. Plus you can also thermally see the enemies and drones through walls to help avoid them and plan out your attack.

The game is relatively easy to control. My only real difficulty with the controls was the jumping actions. Occasionally it was troublesome to jump over certain items if my character wasn’t placed perfectly. If I was not facing the item perfectly I would merely jump in place rather than over the item. Otherwise the game controlled very well.

The music from the game was very well done, in part due to the fact that Paramount utilized the same team from the movies to work on the game as well. The decision was definitely a good one as it did well to draw me in to the game. The game also looked great with a lot of attention paid to the detailed environments. The look of the environments in tricorder mode was also very slick, which made scanning the areas even more enjoyable.

My only critique would be that the text displayed on the screen, especially when the Gorn are subtitled, was way too small. I had to lean forward towards my television screen every time in order to try to read what was being said.

When played on the easiest setting the game the game isn’t too difficult, so if you do end up getting killed it’s not too big of a deal. The few areas that did prove difficult were very frustrating to replay over and over. At one point I took control of the Enterprise’s phasers and photon torpedoes and had to defend against an attack. I just had to survive until a certain point, though that wasn’t explained very well at first and I replayed the segment numerous times without knowing what I was supposed to do, or what I was supposed to shoot at, until I somehow survived.

Another part of the game involved a Gorn on-board the Enterprise who I was being told not to let escape. The only trouble was that was the Gorn could cloak himself and I needed to use my tricorder to locate him. But you can’t scan and shoot, so the event involved a lot of back and forth. Coupled with the fact that I needed to override the Gorn’s tampering with the shuttlebay controls so that he couldn’t escape. No matter how much I shot at him his life meter never seemed to go down. 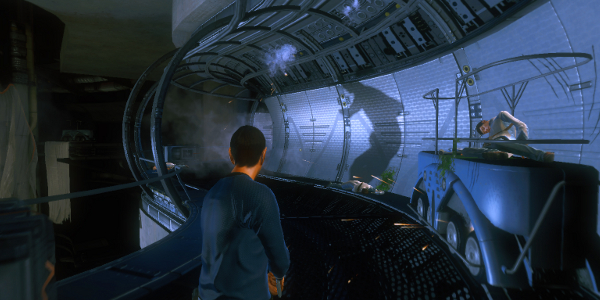 It was only after more than half an hour of fighting with this Gorn again and again that I realized that the Gorn can only be defeated if you LET him get access to the shuttlecraft and attack him in the ten second window that he’s boarding.

So the constant calls over the intercom telling me not to let him override the controls were actually not helpful.

These segments, where the objective wasn’t clear, were not fun to play at all.

Overall the game is very fun to play and was definitely worth it. Playing the game is like playing the newest Star Trek movie franchise. Gear up for some fun.