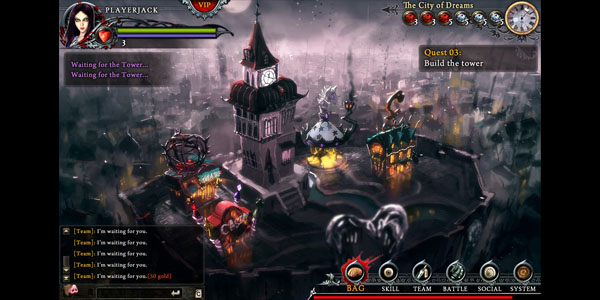 Don’t panic. I’ve been reading through the Facebook posts of the above recently released concept art from the latest Alice game, and I’m here to help sort out some concerns. It seems many fans took this glance at a section of the new game, Alice Otherlands, as a Facebook social game. American McGee seems to have personally responded to these concerns with the statement after the break.

That screen represents one small aspect of the game – managing Londerland. There are many other facets to the game, which we hope to share in the future, including adventuring into and fighting inside the minds of London inhabitants. All done in 3D. All beautiful. All wrapped in narrative. This is just one small piece. Also, when you say “social game,” you imply something presented on Facebook and played for free – we are NOT looking to publish this game to social networks – but to places like Steam and SpicyWorld.

Other tidbits about the game have been revealed by the Alice: Otherlands Facebook responses to the initial concept art posting. Revealing the current idea is that, “In this game, Alice will be entering the “Otherlands” of people’s minds. Some of those places may be dangerous and she may need help,” when responding to critiques of these images. So it seems this will be an additional part to the game, built potentially on a sequel everyone will know and love.

Of course all this relies on American McGee getting the rights to make a new game from EA. The Facebook page also states that this will be a Kickstarter project, should the rights be obtained. So there you go, a look at potentially a new section in the hopefully upcoming Alice game.

Thanks to American McGee for allowing this art to be released. It may have created some waves, but it’s definitely drawn our attention to the title. We’re definitely going to keep posted on this project and it will be good to see another Kickstarter success story which hopefully this will become quickly when their campaign begins.