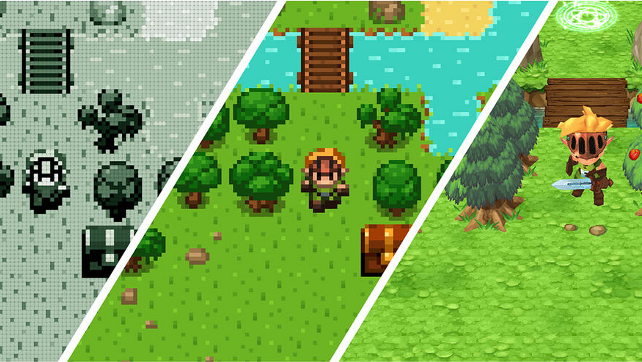 A new indie title, which is a Kickstarter success story, Evoland was released yesterday on the publisher’s website and was released on Steam and GoG today. The game is an action RPG and shows the evolution of game through the console generations.

The game starts off with very basic graphics. Picture playing on the original Game Boy. Yeah, that basic. Then as the game progresses the graphics improve to 8-bit, 16-bit, 32-bit, etc.

Imagine that you’re playing something like The Legend of Zelda. You start off feeling like you’re playing the original Game Boy, transition to the NES and then suddenly the graphics are more akin to the Super Nintendo. Continue and you’re playing through on the N64 and then there comes the GameCube. But it’s all one game and one story.

Sound cool? You bet it does!!

The game is the evolution of the original Evoland Classic, which was created by Nicolas Cannasse during a Ludum Dare competition in about 30 hours. The original Flash game won the first place award out of around 1400 games and reached over 300,000 players within a couple of months.

The game continues the story started in Evoland Classic, taking you further along the history of action adventure gaming. The new Evoland adds collectible items, new monsters and bosses, and new play styles, not to mention full 3D environements

Check out the trailer to the game below and you can pick it up on the publisher’s website (Shiro Games) for $9.99, or pick it up on Steam or Good Ol’ Games.

As someone that’s not really big on PC games, I’m personally hoping that the game one day somehow ends up in the Nintendo 3DS eShop.