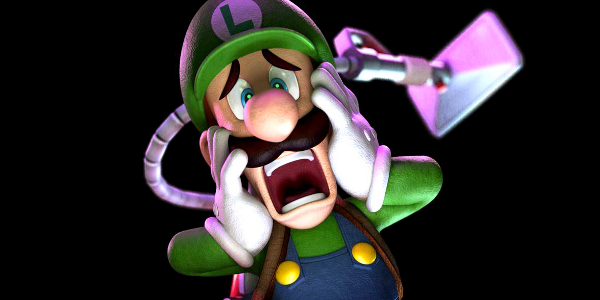 Luigi is back at the mansion and ready to face the ghosts causing havoc. Okay, so he’s not really ready to face them; in fact, Luigi is reluctant and has been thrown back into a similar situation as he was before.

Luigi’s Mansion: Dark Moon is the sequel to the 2001 original Luigi’s Manison for the Nintendo GameCube. The game brings Mario’s little brother back to help Professor E. Gadd.

Professor E. Gadd has been studying the friendly ghosts that are unique to the area. The Dark Moon that hangs over Evershade Valley seems to have a calming effect on the ghosts that reside there. But when the Dark Moon suddenly breaks apart and falls into the valley below, the once-friendly ghosts become hostile, trapping E. Gadd in his bunker!

Luigi, who is at home watching TV, gets a big surprise when E. Gadd suddenly shows up on his TV screen and drags Luigi kicking and screaming through the screen into the Evershade Valley! After a little persuasion, Luigi agrees to help E. Gadd on his quest to find the Dark Moon pieces and restore it to its rightful place in the sky.

Once you’re back in the mansion the game gets down to business and plays very much like a friendlier version of the original Resident Evil, except instead of exploring the mansion while avoiding zombies, you are hunting and capturing the ghosts that wander the place. Think of it as a cross between Resident Evil and Ghostbusters. 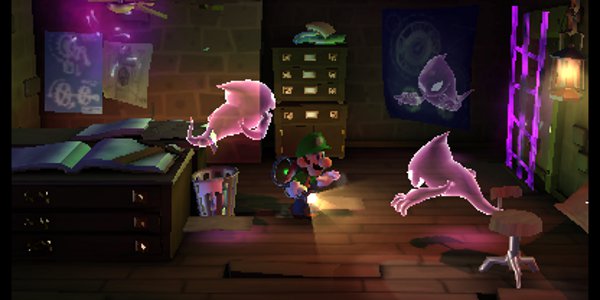 Luigi’s Manion: Dark Moon is a gorgeous game and is full of character. The environments are beautifully detailed, interactive, and full of secrets. Once Luigi finds the Poltergust 5000, the modified vacuum with which he can suck up the ghosts, he can use the item to interact with the environments. Switching on the vacuum will cause curtains to move, chandeliers to sway, and can be used to uncover hidden items. There is loot to be found hidden all over the place.

Certain areas of the game have parts of the room that react to Luigi’s presence. For example, walking down a long corridor past a coat of arms will cause the sword to fall if our green bro gets too close. Luigi has a health meter which starts off at 100. Getting hit will cause Luigi will lose ‘hearts.’ Lose them all Luigi will faint. Luckily for our hero he can find health power ups as he ventures through the mansion. Plus there’s a handy item in each level that will allow Luigi to be revived once. Hang on to this though, as it’s worth a lot of coin if you complete the level without fainting.

There are more things to collects as well. Along with collecting the shards from the shattered dark moon and coins, Luigi can also discover hidden gems around the environments. There are 15 of them in each mansion.

Luigi can not only look around his environment by pressing the (x) button when there is something to investigate, but he can also shine his trusty flashlight up or down to discover hidden items as well. Sucking up certain things with his Poltergust 5000 may also open up a new place to explore, or allow him to peer out a window and see something that needs to be reached. There are even items that can be sucked up with the [R] button and then shot back out with the [L] button.

Although Luigi is on his own in the spooky mansion, he’s not alone. Professor E. Gadd has equipped Luigi with a modified Nintendo DS (dubbed the Duel Scream) which the Professor uses to communicate with the green one. Whenever there is something that Luigi needs to know, the little device will chirp to life so that the two can communicate. There’s also something charming and funny as Luigi opens the DS with a soft, “Hello?” 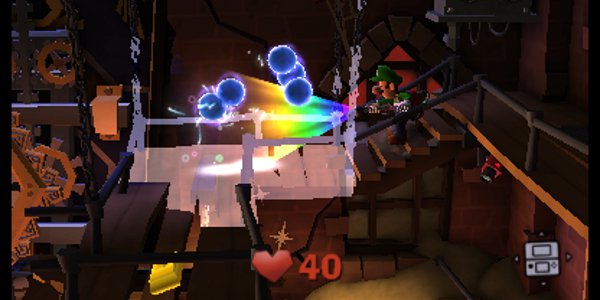 There are a lot of little audio moments in the game that add to the atmosphere. Despite how timid and terrified Luigi is, he can’t help but hum along to the spooky soundtrack every now and then. Plus he groans and makes worried noises now and again.

The game supports local and online multiplayer, though this is not available at the start of the game. The ‘scarescraper’ opens up after you complete a few missions. You can play local multiplayer with multiple copies of the game as well as download play. Online play with friends or worldwide is also a feature.

There are several modes available in online play: Hunter, Rush, Polterpup, and Unlimited. Hunter mode lets your team (or just you if you’re feeling dangerous) hunt down ghosts to clear each floor as quickly as possible. Rush mode challenges your team to find the exit before time runs out. Searching objects as well as defeating ghosts can extend your time. With proper teamwork (one searching for the exit and the others extending time), the job can be a cinch.

The final mode, Polterpup, challenges the team to use the dark-light to track down Polterpups. Of course, Unlimited is just that … a never-ending tower. 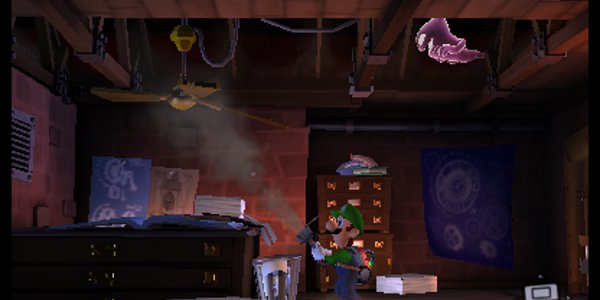 There are three different sizes of levels to choose from (5, 10 or 25 floors) as well as three different difficulty settings to keep the challenge going. As an added bonus you are rewarded treasure depending on how you rank in the multiplayer, which can be taken back to the vault for the single player game. So the multiplayer, which is quite fun in its own right, has added value.

There’s also something satisfying defeating the boss at the top of the scarescraper on your own (with a five minute time limit), after the other three players bail on the game at the final level!

The game controls very smoothly. In addition to looking up and down with the flashlight to search the rooms, Luigi can also strafe left and right while keeping his light shining forward. During certain sequences, and while holding Luigi still, the 3DS can be moved around to virtually look around the environment. This looks great when playing in 3D mode.

Luigi’s Mansion: Dark Moon looks and sounds great. The environments are all animated and rich, with character and are full of life. Nothing is stationary in the backgrounds and are all either moving or can be interacted with. The cartoony realism of the rooms adds to the spooky atmosphere of the game.

The music and sound effects in the game are subtle but effective. Luigi occasionally hums along to the soundtrack, which is pretty humorous.

Not only does the game have a great story mode, but the game is split into episodic missions. After Luigi reaches a particular goal, Professor E. Gadd brings him back into his bunker to collect the ghosts and other goodies recovered. After returning, Luigi can actually go back in and try to clear the level with a better time, more money, etc. Money collected redoing levels is kept which makes redoing levels worthwhile. Collecting enough money also allows Luigi to upgrade the Poltergust 5000. Upgrades include such things as longer, greater power and more time using the dark-light before it temporarily burns out.

Depending on how you perform you will also be given a rank which gives you even more incentive to redo levels.

There are also a ton of extras to the game. In each level you can also uncover Boo. Capture Boo in each of the levels in a mansion and you’ll unlock a bonus stage.

Luigi’s Manion: Dark Moon is a fun game with a lot of character. Luigi’s Mansion was a tremendous game and one very deserving of a sequel. Dark Moon lives up to the first game and is incredibly enjoyable.