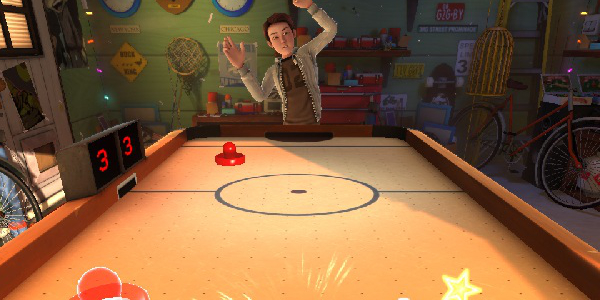 If you’re looking for a collection of mini games that use various features of the Wii U GamePad, Game Party Champions (hereafter GPC) is an interesting mix. You’re given a set of eight games and currently the game is selling for as low as $30 or less. That isn’t bad, all things considered. When the game first came out, I found it a little hard to recommend at its full price point, but as closer to a budget title, there is fun to be found in GPC for the Wii U.

GPC features a story mode that allows you to select a character to be hounded by your best friend Jace. He’ll drag you out of the apparent slump you’re in, which is briefly alluded to later in the game, and get you challenging some others at the local arcade. Without spoiling too much (but still considered a spoiler I suppose), you complete four games at this arcade; four in a wild west themed amusement park; and then finally make it to the world championship. The championship is basically a hard mode of all the content you’ve completed up to that point in a huge stadium. 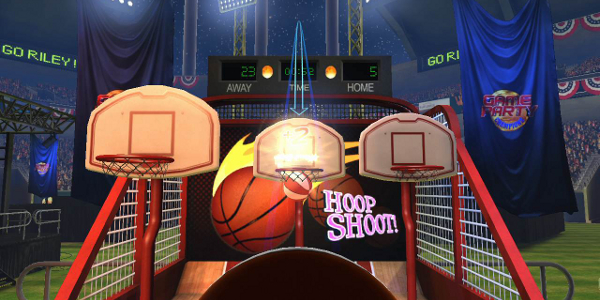 The games themselves are relatively fun, but some do have their issues that can slow down your progress to being a champion. Air Hockey can be a lot of fun, but at times the controls of sliding the stylus can feel like you’re getting the angle wrong, but it doesn’t feel wrong. At least it didn’t to me. Ping Pong doesn’t allow you to strike until the ball has passed the midpoint over the net. This, of course, makes sense realistically, but if you slide too soon to strike, the ball will sail on by with your attempt going unregistered. To finally beat one game I just kept slashing the way I wanted to hit the ball over and over to ensure my strike landed.

They’re not all problematic though. Basketball and Football both feel fun, natural, and very responsive. You hold the Wii U GamePad sideways to aim your throw, and then slide the stylus across the screen to complete the action. Football features throwing the ball through holes, or at cutout player targets that pop out or move. Most games in GPC treat the Wii U GamePad as the floor in front of your character, so looking at the screen allows you to view the level surface before you. The TV screen displays the objective you’re aiming for, or in Air Hockey and Ping Pong, your opponent. 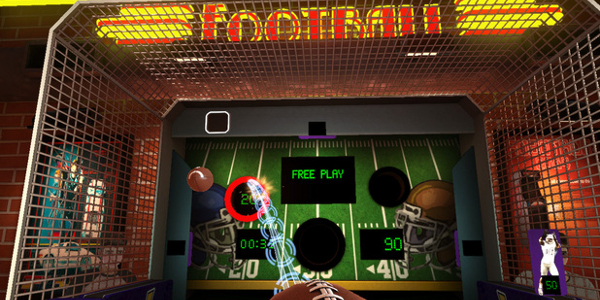 When I first tried out GPC, the event that drew my attention the most was the Water Gun game. It’s a wild west themed shoot out with a water gun you aim by looking around with the Wii U GamePad screen. Fans of Nintendo Land will already be familiar with similar concepts, like in the Zelda or Metroid games. Water Gun is more focused on the game area in front of you instead of looking all around like those games, but it really shows off the tech. I’ve always thought the concept of looking around a 3D space with the Wii U GamePad was neat from the start, so I’m a sucker for anything that uses that concept. In Water Gun you aim and fire water blasts at bad guys around a wild west town setup; like a carnival or arcade game of similar shooting gallery concepts.

Baseball I found to be frustrating until I realized what I was doing wrong. I’m pretty sure the game tells you to drag the stylus across the screen diagonally. You do want to do this, but you’re also swiping towards the target you want to hit too. This is different than Wii titles that had you focus on when to swing to aim your hit. You’re literally controlling where the ball goes by swiping in that direction when the ball is across the plate.

Skill Ball was one of the first, if not the first game I played in GPC. I love skee ball in the arcade and playing it on here gave the game bonus points for me. However, once you get the hang of it, it’s really basic. So when you figure out how to drag the ball and roll it at those 50 and 100 point cups, you’re just doing that from then on out. You’ll have to as well since later in the game the scores it requests you to get are quite up there in story mode. So you will need to learn to use this system to get those high points if you want to continue. I don’t know how it could be made any more realistic, but for what it is, Skill Ball is fun.

Mini Putt gives you a mix of courses, nine in total, which I’m pretty sure you can play all of. In story mode I think you only play the first five, but then in free play you can play the rest, I think. These are fun, but at times the hills in the courses can seem just a tick too long. So even though you drilled the ball, it rolls up so high and then comes back downhill. Naturally there could be a trick to this, but it does feel frustrating when you keep trying to find the way to play it right on the hill when just knocking the ball around feels more rewarding. 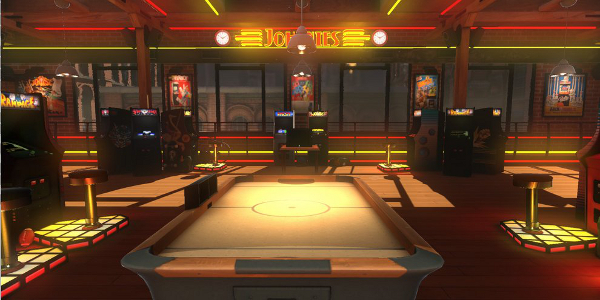 The games themselves may have their ups and downs, but some of them just aren’t bad. For the lower cost you can have some fun with this title. GPC’s biggest problem I found was the down times when it’s loading. Each game attempt can take upwards of fifteen seconds to load. This compounds the frustration of losing because you’ll have to wait through the loading process again. That, and saving after each game takes a moment too, even if you lose. All these small moments added together really bog down the game. The visuals are quite fun, but I’d have been just as happy with lower quality graphics if it meant loading the game faster. Usually you have a decent group of people watching you play in game. While this does add to the atmosphere, it did make me want a more basic title with maybe more of a focus on the games themselves and different ways to play them as a party game.

As it is, some of the games have variations: Baseball features curve ball and fast ball throws, or a mix of the two; Basketball has moving nets that tick back when you sink a basket, or turning baskets that angle away from you to force you to switch up your target; and Football has a mode to aim for a high score, or various pop up player cutouts with randomized point rewards so you need to find the high point player. I’m pretty sure in freeplay mode you can select between these game variants as well as the games themselves.

There is a party mode too that features sharing one Wii U GamePad to play the various games. Other players can also use Wii Remotes to try to mess around with the main player. I didn’t try this for all games, but it mostly seems to allow you to create a black hole of sorts that just seems to serve as a visual distraction.

If you’re in to these kind of games, and I do mean a mix of the mini games included, you’ll probably find something to enjoy in GPC. Otherwise, most gamers may just find this title to be a letdown. I personally enjoy some of the mini games, but I can see why others may not like this game. It’s really subjective. Basketball, Football, and Water Gun are probably my favourites. Air Hockey isn’t bad either; it can just have its moments that simply feel off. Maybe I just don’t understand how it’s meant to be played. The presentation is good, it’s just some of the games can feel not as accurate as they could be, and the loading times really could use improvement.