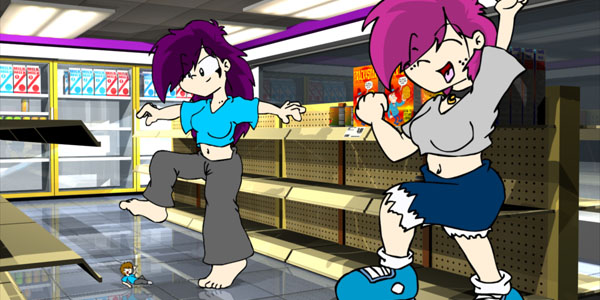 Some of you may know I also write for Darkain Arts Gamers, a proud supporter of news for Broken Joysticks. That same company is also my animation studio and the group behind a video game concept that didn’t quite take off. Now they’ve joined the crowd funding scene on indiegogo to get the time to release their latest animation, FantaSize 2. You can see more about it here including a trailer: http://www.indiegogo.com/fantasize2 or read more below.

Years ago Darkain Arts released Ninja High School: Time Blast, a comic book that came with a video game which continued that issues story. Unfortunately the artist behind the book was in a transitional period at the time and it was unclear if fans of the series knew about the production.

That’s not all, they began their animation career over a decade ago with Antartic Press producing an OVA of Ted Nomura’s Luftwaffe 1946 manga series. FantaSize came many years later in 2006 after several TV pitches that were successful for a time, but usually ended in delay or offers to buy the properties out directly which Darkain Arts didn’t want to do at the time.

FantaSize 2 continues the story of the original, which starred a goth girl named Misery who has a bizarre night after finding shrunken people in her apartment. The story takes a surreal twist when instead of trying to help the people, she becomes paranoid of them after accidentally stepping on one. She doesn’t believe they’re real of course, but now the sequel which the studio is seeking crowd funding for features Misery at her night job and once again there are more shrunken people around her. Will she be able to keep her sanity long enough to find out what’s going on? Well that depends if the project gets funded or not.

Rae actually met me at a few anime conventions where I was hosting animation panels and is the one who brought me into the world of Broken Joysticks. While this blog has no affiliation with the animation project, I do thank Rae very much for letting me share about it here as well. I appreciate this, and all the opportunities Broken Joysticks has given my wife and I in video game journalism.