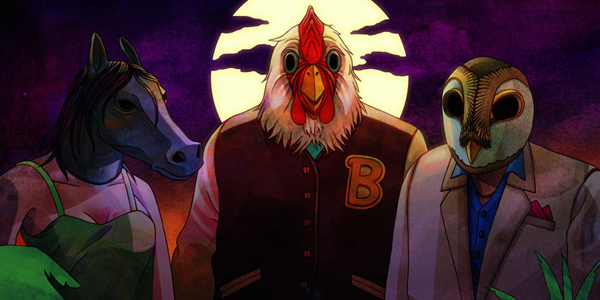 First impressions are often deal-breakers for so many, especially for those that look for the next video game to play. It can seem quite obvious that when anyone looks at a single glance at a screenshot for Dennation Games’ Hotline Miami, they see a pixelated 2D top down game that seems to take place inside a decently detailed building layout that also takes place in an ever-color-changing gradient. From a basic perspective, it’s not enough to win over an audience; that is until you see the game for what it truly is and discover that it’s more than looks that make it an indie gem.

Hotline Miami opens up in the spring of 1989, with our nameless hero entering a shady building, only to be greeted by three men wearing animal masks. They make it clear from the start that they hold all the power, and our DeLorean-driving character has to comply with everything they must do. Upon returning to his apartment, he is greeted by messages on his answering machine, telling him to arrive at certain locations to complete a various task, but it all comes down to ruthless violence. After committing to a series of vicious killings and accomplishing what needs to be done from the answering machine message, he will then travel to a local destination coming across a fiery red-haired individual who seems to take care of him, anywhere he goes. The plot among all of this is paper-thin and odd at times, but it seems okay to ignore; as it is hardly the most important facet to the game. 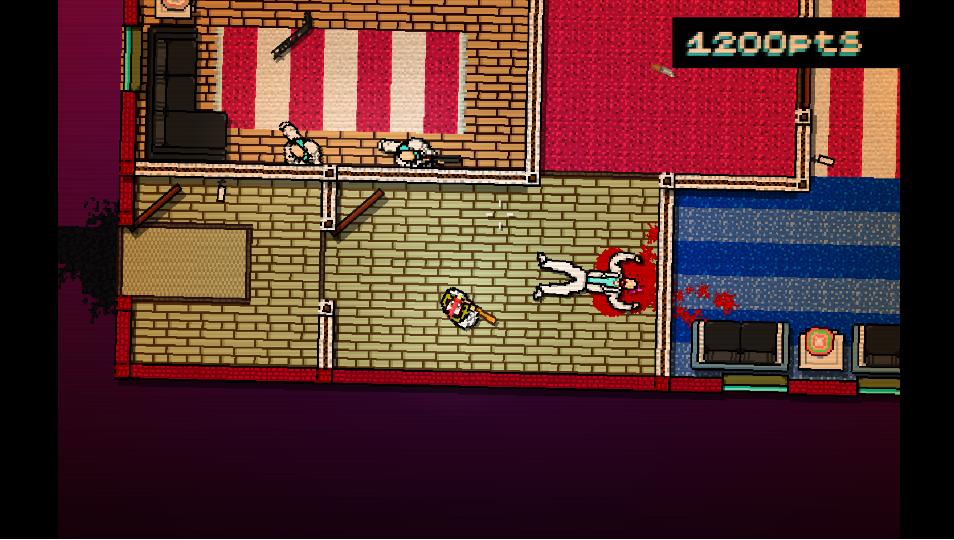 There is an addictive nature to what Hotline Miami has to offer, as each level encourages you to be more strategic and cunning in your violent acts. At first the level layouts feel small, and has you dealing with a meager handful of goons who don’t seem quite as strategic as imagined. That is until you discover that one direct impact of any melee or ranged weapon and it’s game over. Not to mention that any sight of the hero or a noise of a shotgun blast in a certain radius will attract them to the source, hounding him to a bloody death. To combat the situation, the game enforces the player to emphasize melee kills, using baseball bats, crowbars for and other such beating implements to bash the enemy into a puddle. Now there is no wrong way in going about a one-man coup d’état against the thugs of Miami, be it using assault rifles or crowbars, as fortunately the enemies are not nearly as advanced as other guards in other games. Even if you kill someone in the same room with another person in it, they would act like nothing has ever happened, until you get in their line of sight or make a noise. Psychotic, but hardly smart.

The important element in this game is that some enemies may just be down for moments, and that can give you momentary relief until they awaken and proceed to slaughter you. To combat the situation, there is a lot of encouragement to brutally bash the downed enemy’s head into the ground, reducing them into blunt force trauma bodies. As the levels get more complicated and the enemy placement increases While each floor can be completed roughly in minutes (or for speed-running sake, seconds)  there is no denying that assorted deaths are to be had. Fortunately, there are checkpoints at the start of each floor, and with plenty of game overs to be had, a simple restart takes a second and hardly impedes progress. The whole entire goal of each floor is to pretty much kill everyone, and surviving, simple as that. You are then scored throughout the level, on everything from killing enemies, combo-killing, using level-exclusive items, remaining undetected. The score is pooled together with previous scores to help unlock new masks to wear that unlocks special benefits for each mask, and assorted weapons that would appear in later levels. 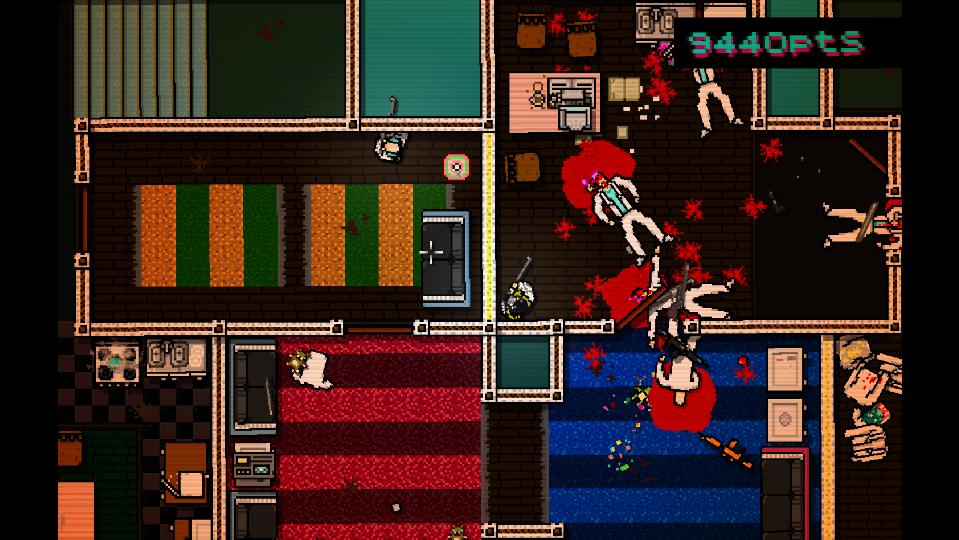 Arguably one of the most strongest suits that Hotline Miami has to offer is its pulse-pounding soundtrack, complementing the satisfying murderous actions with music that fits in with the concurrent theme of late 80’s Miami. Dennation Games lined up a consortium of indie musicians to provide their own original score, from M.O.O.N, Sun Araw, Jasper Byrne just to name a few. Although it could be the first time you may have heard of these guys, they created a collaboration of electronic and chip tune music rich in bass and perfect for the hard-boiled action that entails. It ranks alongside Shatter as a game worth its value in its soundtrack alone. 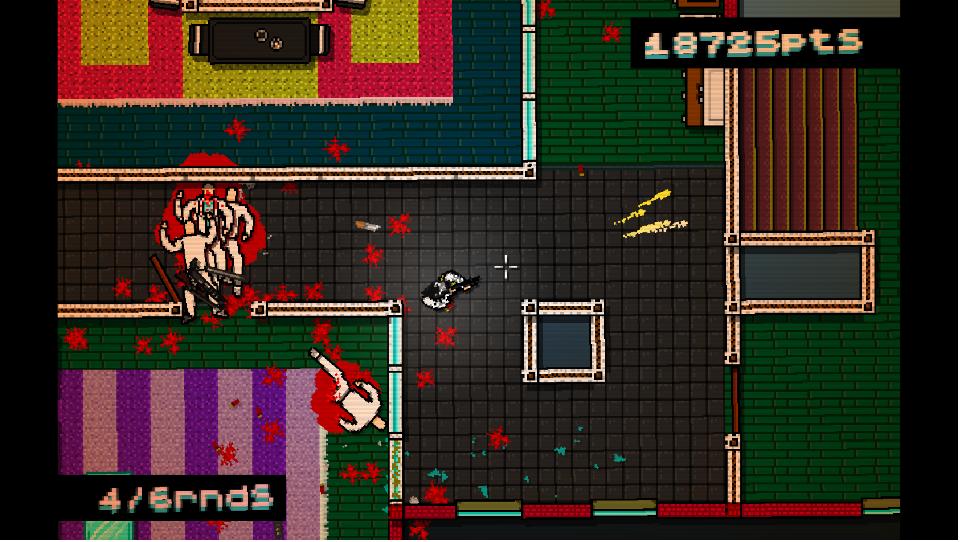 Hotline Miami is a truly bizarre game that feels all too weird and out of place. It doesn’t look right, there is a thinly veiled story and there is something cheap that resonates from it all. Even with all the problems it has, the game still comes together perfectly in creating one of the more surprising action games the indie gaming scene has to offer. Hotline Miami has the drive to be one of the best independent games of the year.