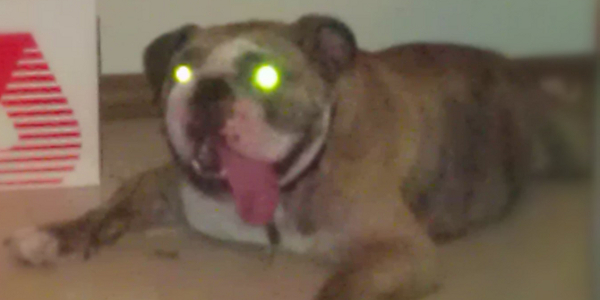 In an effort to exorcise Monty, Broken Joysticks’ official demonically possessed bulldog, I’ve been continuing my Halloween tradition of replaying some of my favorite horror games. Unfortunately, my efforts have only empowered “demonty,” but I’ve gone too far to turn back now.

The first games that truly terrified me were the original Doom games and Quake. After all, terror is about apprehension, and the sounds of unseen pinky demons snorting triggered that for me. Trent Reznor’s excellent soundtrack for Quake ranges from frantic to eerie and adds to this sense of anxiety. If you play Quake, be sure to check out this patch.

When it comes to pure horror, Clive Barker’s Undying delivers. I’m flooded with adrenaline when Undying forces me to circle strafe around scores of werewolf-like beasts, enter a hellish underworld, or watch impotently as a ghost throw hooks at my face (which, coupled with Hellraiser, suggests Barker has a thing for hooks). Heck, you can even be killed at the start of the game by rats in the manor’s courtyard. It’s a shame that Undying isn’t available on something like Good Old Games, and that Barker’s next video game, Jericho, was barely worth the $1.69 I paid for it. On the plus side, if you happen to find a copy of Undying, the protagonist, paranormal investigator Patrick Galloway, can learn to resurrect anything, including donkeys. I hope we can all agree that undead donkeys are inherently awesome.

While on the topic of the undead, I love Vampire: The Masquerade – Bloodlines, one of the best RPGs from the past decade. Fantastic writing (courtesy of Brian Mitsoda), great facial animations, and excellent voice acting (particularly from John DiMaggio, a.k.a. Futurama’s Bender) make Bloodline’s NPCs some of the best in the genre. Bloodlines is also very replayable (you could talk your way through most of the game, be a combat monster, take the stealth approach, etc), and has some genuinely spooky levels, like the haunted hotel. Its greatest flaw is a combat-heavy end game that punishes ill prepared players. I suggest playing with Wesp’s latest unofficial patch (and investing some experience points into melee).

There are other games that I’ll reinstall in every once in a blue moon. Call of Cthulhu: Dark Corners of the Earth is an FPS where you don’t get a gun for the first few hours and there is no heads up display. One memorable, and horrifying, sequence forces you to frantically move between hotel rooms, locking doors and pushing furniture to keep angry locals from murdering you. Another favorite is Vampire: The Masquerade – Redemption, a hack and slash RPG featuring a protagonist who begins his un-life in Medieval Europe, takes a nap for several centuries, and wakes up as a total anachronism in 1999 (“What manner of beast is this central computer, that it can besiege fortresses?”). F.E.A.R. is another game that I play through every year or so. The “little ghost girl pops out at you” sequences aren’t scary after the first playthrough, but F.E.A.R.’s excellent enemy AI cements it as an outstanding FPS. Unfortunately, the sequel continued the Alma the Vengeful Ghost plotline. Here’s my idea for a F.E.A.R. sequel: F.E.A.R. operatives face off against a Werewolf version of Van Damme’s character from the Expendables 2.

Monty is currently levitating. I think I better do something about that. In the meantime, what are your favorite horror games, dear readers?