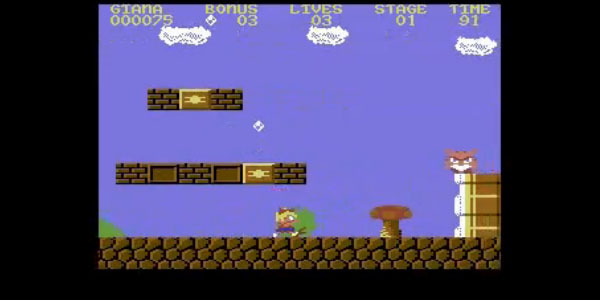 Recently released for PC and now available on Steam, ‘Giana Sisters: Twisted Dreams‏,’ has a very interesting past that many may not be aware of. This is actually the 25th anniversary of the Giana Sisters much like many other game series recently. However you probably havn’t heard of the original ‘Great Giana Sisters’ have you?

The reason for that more than likely is that Nintendo had the game pulled from shelves due to the original being a Super Mario Bros. clone. This is actually quite unfortunate since the game itself clearly shows some of the concepts from this weeks Giana Sisters release. Instead of instantly transforming, Giana collected some sort of swirling orb that turned her from cute into punk in the original game. The 1987 version does have moments of looking like a Mario clone and then merging into it’s own level design. Take a look for yourself in the video below!