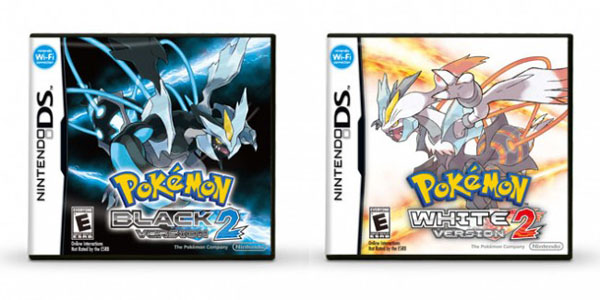 This review is mainly for all of you who somehow missed playing much of Pokemon Black and White 2, like me! I’ve only spent time with the first hour of the original, and I have to say, I like the sequel better. Why’s that?

This does make it feel more like the usual expanded versions added into Pokemon games in the past, and I did wish that I could pick from three new Pokemon instead. However I quickly realized this gives trainers a chance to take a different main Pokemon and add it to their collection. I’m unsure if you can transfer between B&W 1 and 2, however considering the EB Games downloadable Keldeo can be transferred to the sequel, I assume it’s an option.

Everything feels familiar but fresh in Black and White 2. You’re given a new storyline that takes place two years later with two different characters to choose from. They have a new rival whom is more of a competitive friend in this one who helps to move along the story. Events flow well and there are few chances to feel lost. I found myself exploring the world more in this sequel, and occasionally you are rewarded finding items for your efforts. Mind you I’ve searched many trash cans and still havn’t discovered one item… to be fair though the game does inform me the trash can is empty. Gotta search ’em all!

Speaking of tasks you complete to be rewarded for, Pokemon Black and White 2 adds achievements in the form of Medals. You meet a man who gives you hint medals and when you unlock either new hint medals or earn medals for completing tasks, he shows up at the local Pokecenter. Hint medals are just like any unlocked achievement in that they give you a brief hint about the task that needs to be completed to earn that medal. As far as I’m aware, this is a new addition to the sequel. It is done well in a traditional sense in that you get a few easy medals to begin with, much like other games have almost freebie achievements for doing something as basic as starting a new game.

Combat is much the same, giving you that incentive exp bar right there in battle. It’s kept me playing extra in order to push towards evolving my main Pokemon. Various types of abilities are ‘super effective’ against certain types of Pokemon, while others are weaker. Each Pokemon can have up to four abilities at one time. As they grow in power, Pokemon can gain new abilities that can be ignored or can replace a current ability by having your Pokemon forget the old skill. Skills range from stat effects and condition changes such as poison, to straight forward basic or elemental based attacks.

The traditional sense of capture is still here too. You’ll have your Pokemon battle wild Pokemon, they’re the only ones you can catch, until their health gets very low. Then you throw at a Pokeball and hope for the best! Condition effects tend to help weaken a Pokemon into capture as well.

For those who haven’t played Black and White before, there is a lot offered in this sequel. The world is beautiful, and feels more alive than ever. There are a lot of distractions too, first of which is the Pokestar Studios which allows you to create a movie by acting out a pokemon battle on a green screen along to a script. It’s actually quite the diversion with multiple movies to produce and varying response from those viewing your movie in theatres, it’s actually too big to be called just a mini game.

There is a lot to see and do here. If you’re a fan of the Pokemon series storylines then this is another romp through the familiar themes you’ve come to know and love. All things considered for the asking price you’re getting a lot of content for your money. This game has worthwhile content and it’s a great addition to the Pokemon saga.