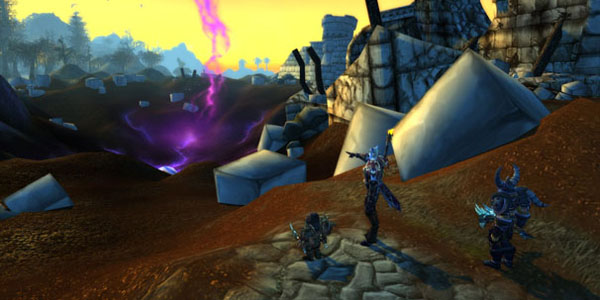 For those geared up and leveled up enough to take on the challenge, Theramore’s Fall is now available to all level 85′s leading up to the Mists of Pandaria expansion launch! After launch, you’ll be able to que up for Scenarios at level 90 in Mists of Pandaria, which is what the Theramore’s Fall level requirement will convert to after this week. These are small instances that group three adventurers together.

So how is the first released scenario and how does it tie into Christie Golden’s wonderful Tides of War novel?

I’ve been enjoying Jaina Proudmoore: Tides of War very much these past few days. Naturally the scenario event does contain spoilers to the book, but more importantly the novel is a lead in to this adventure. So regardless it’s very much worthwhile to check out the book, but I’ll have more about that another day when I’ve finished reading it.

The event is a lot of fun with a good solid mix of reward. My first play through on Alliance left me with most of the dropped gear that added up to a tidy sum of gold. Upon completion you’re also rewarded with an open lockbox containing either a high level item it seems or fireworks. I wouldn’t know about the former since I havn’t got one yet, but my guild mates seemed quite happy. You also get some mail from Jaina Proudmoore, so be sure to check. Horde also recieves a different mailed goody (and I’d assume would get mail from a different character).

In the Alliance version of the scenario you’re charged with finding Jaina Proudmoore herself and causing some chaos along the way. Small quests such as boat burning and collecting stolen standards were included, but not in the traditional sense. You just complete the tasks without getting them as actual quests.

Enemies are spaced out well enough that you can pull mobs without worrying about getting overrun too badly. You’ll probably at least want someone with healing abilities though to hold through boss battles. There are some scattered lesser foes if you want to mop up some coins before the end too. All of this ends up being a satisfying short adventure that you can take again and again.

I havn’t flown there myself but *spoilers ahead* it sounds like Theramore has been indeed destroyed by the Horde. It should be very interesting to see how this plays into the story. From the looks of it, the co-operation that brought the world together in Cataclysm has ended far too soon and again the tides of war are changing.