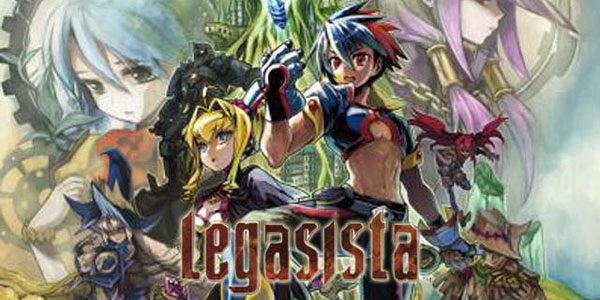 If you’re a fan of NIS games and enjoy action RPG’s like Secret of Mana, this is a game you may enjoy. While it doesn’t feature the vast explorable world like Secret of Mana featured, it does have the random dungeons and intense leveling you’ve come to expect from NIS. That being said, you may want to skip this review if you’re already planning to get the game. I’ll do my best to avoid spoilers but due to the gentle learning curve in the game it’s hard to not somewhat spoil the content of the first five worlds you visit. If you’ve already looked up the games features you’ll know what unlockables I’m referring to already I’m sure. So lets talk about the system Legasista uses first.

Unlike many past NIS classics from Disgaea, Phantom Brave and so on, Legasista is a top down action RPG. Experience is accumulated over the course of each dungeon exploration, and then rewarded upon the completion of the dungeon. However quitting or dying do still reward you with some of your EXP earned. Fans of the PSP game Cladun will feel right at home here with a similar system to that game.

Your character has the ability to level up to 999, with levels above 100 becoming more challenging to increase the game notes. In the tradition of NIS games however there are tons of stat boosts you can get from items. Legasista uses a titles system, which basically means items have a main title that effects their sub titles and the sub titles add stats and effects to the item. With the absence of stores or any sort of economy, you’re encouraged to throw items away to keep their titles to be swapped into new items later on. 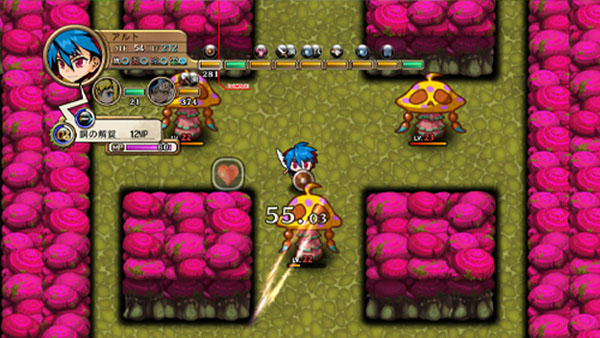 In Legasista, HP has a unique setup as well. Each character can swap ‘energy frames’ which are basically a palette of small health bars allowing you to equip items into various slots above them. How this works is when the first half of your main HP is drained, your equipment can start taking damage. If damaged too much equipment can then become broken for the remainder of the dungeon. Other factors can hurt your gear too, but in general you keep your character safe by keeping the first section of their health bar full. More energy frames can be earned by leveling up.

All characters have jobs which you level up. When a character reaches level 20, you can then switch to a new job. Jobs reward JP points which allow even more stat boosting between all jobs, or just job specific boosts.

Legasista’s dungeons contain tiles which act as trap triggers. These can be both good and bad events. Usually they’re faded out and hard to see until you get up close. This is probably to discourage dashing around dungeons. Traps can work to your advantage, allowing you to hop on an arrow trap and see it shoot through the enemy in front of you. You’ll still need to get out of the way however since they do continue on past their target. Others heal you, cause earthquakes, or even shoot eggs from the wall when hit with a well timed strike produce a new enemy to fight.

After all that, you should have a good idea if this sounds like a game you’d enjoy. Some of what follows next is content you unlock during the games story but could also be considered features. 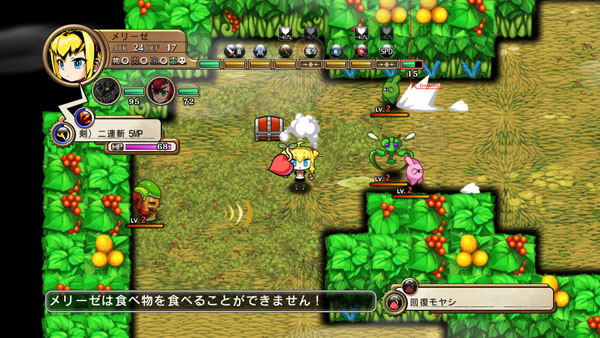 The first thing you may notice when you enter the world of Legasista, is your broken style character with his hands and boots floating away from his body. This style did throw me off at first, especially considering cut scene visuals are very well done. This system is here for a reason however since the character creation system that the Cladun series introduced is included in Legasista as well! Exporting your files to a USB stick from the PS3, or even using pictures from a digital camera you can create your own art for custom characters. The game does include a paint program too if you’re just looking to work within Legasista itself.

Dungeon exploration for the first few worlds is relatively short. You go from an extensive tutorial that spans many dungeons, to worlds that only contain about three. After you unlock random dungeons or ran-geons as the game calls them, it’s clear you’re expected to explore them to level up and continue progressing. While this sounds tedious and like you’re being forced out of the story line into a grind, the ran-geons are fun and feature a lot of gimmicks to keep progression interesting.

Early bosses tend to come in the form of larger versions of enemies you’ve already faced, but they are there and do pose an interesting challenge. Due to their larger size it is more difficult to dodge the increased area of attack they can now perform. You’ll tend to know you’ve fought a boss or at least a mid-boss by the treasure chests in the room that follows.

I found the controls to be easy to use for the most part. The setup feels different but once you get used to it the gameplay flows well. Left bumpers control magic and ability switching and use, the right bumpers swap between single use items you find in the dungeons that are useable in the dungeon they were found in. The D+Pad and left joystick control movement, and the right joystick allows you to switch between characters. Otherwise your character can attack, jump, and either dash or use a shield depending on your energy frame loadout. 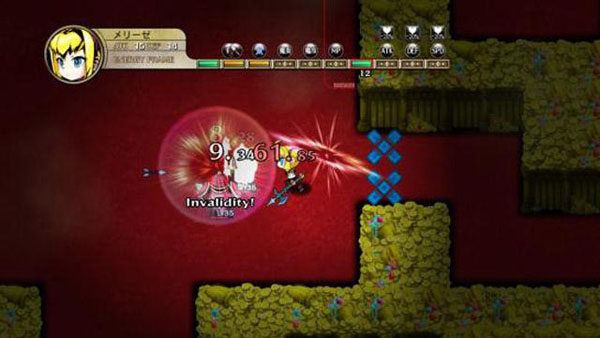 The only problem I had with these controls is that once you’re committed to an attack, holding in the opposite direction doesn’t instantly swing your character around in mid attack. So if you get too caught up into a combo you’ll continue right past your target if you’re off. This doesn’t happen often, and depending on what weapon you’re using you may have a wide range of attack anyway. I did find it to be occasionally frustrating though but I do suppose it fits into the tactical style of NIS games, encouraging the player to make focused strikes.

So finally, the story of Legasista revolves around Alto Straiter, an explorer looking to break a curse that has turned his sister into a crystal. He arrives at ‘The Rail Yard’ an ancient ruin which is quickly revealed to be a technological factory and research facility that is 1000 years old, or at least that long abandoned. An android girl named Ms. Dungeon who is the caretaker of the facility instructs Alto to recover an ancient weapon from the dungeons. The weapon should be able to break the curse on his sister. It’s quickly discovered the weapon is your first new member to join your party, Melize. After her recovery, and subsequent amnesia, the game focuses on finding files containing data plates that Melize can eat to recover some of her functions. You discover more of these the deeper you go into the dungeon worlds.

I’ve really enjoyed the story especially with the characters innocents of not knowing much about technology. Everyone really does stay in character and it brings them to life. Even the sprout characters whom you befriend early on express their joy of being food. The only omission I noticed was the lack of English voice acting. Considering this does feel like a full sized NIS game for half the price, that’s an understandable thing to exclude. I very much enjoyed the Japanese voice acting anyway.

In short, if you enjoy NIS games and as the official website even points out, rogue-like dungeon explorers, give this a go. It has all the mystery and character development you’d expect from an excellent NIS experience, and a unique RPG system to enjoy. While the price point of $29.99 may seem steep for a PSN download title, there is a lot to this game. It feels very much like Disgaea and the like in terms of the amount of content included. Take a look at some gameplay vids on youtube to get an idea of Legasista’s play style. There’s a lot of fun to be had here, especially if you enjoy dungeon runs and leveling up your characters.

*Please note, some images above are from the Japanese version of the game.