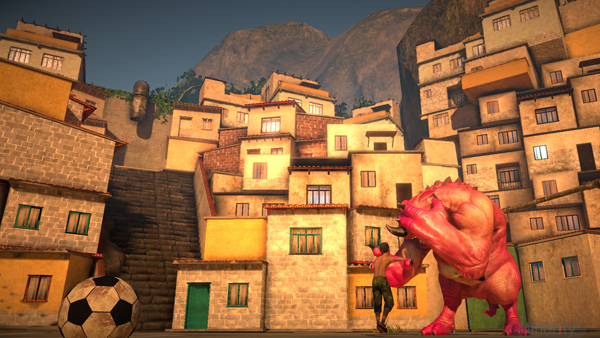 How to describe Papo & Yo, a seemingly innocent little platform puzzler currently available on the PSN for $14.99? A small boy and a giant monster running through a dreamscape of South American slums trying to navigate a world of rust and bizarre whitewashed brick, this game is equal parts enchanting and subversive. It gives an impression of childlike innocence at first but gradually it becomes darker in more and more obvious ways, especially when the main character, a 10 year old boy named Quico, ends up getting repeatedly mauled by the large monster who runs around him. I can’t say much beyond the fact that this is a really interesting concept that is carried out in a very intriguing fashion.

Graphically this game evokes a ps2 era puzzlers, the character models are interesting and well rendered. I especially like the model work on the monster itself, it looks equal parts silly and threatening by turns, which fits quite well with the overall dream-like theme of the game. The other-worldliness and art-style is very child-like, involving chalk lines and strange signs,  though also there are elements of violence inherent in the way that some of the sketchy outlines work. The best game of comparison for me in art style would be the game Rule of Rose, a theme of childlike innocence and wonder perverted by something dark and nasty. The art setting evokes the poorer districts of South American cities with the multileveled, multicolored housing which you may have seen various actors parkouring their way through.  However, there is another aesthetic hidden underneath, one of clean shining white brick. the only problem is that the graphics in some places are a little to seamless, that is to say that it’s kind of hard to tell where you can and can’t jump to and from. You may spend some time jumping at things you can’t get to, but that is to be expected. The art is rather impressive for a downloadable title and is definitely a very good reason to pick up the game 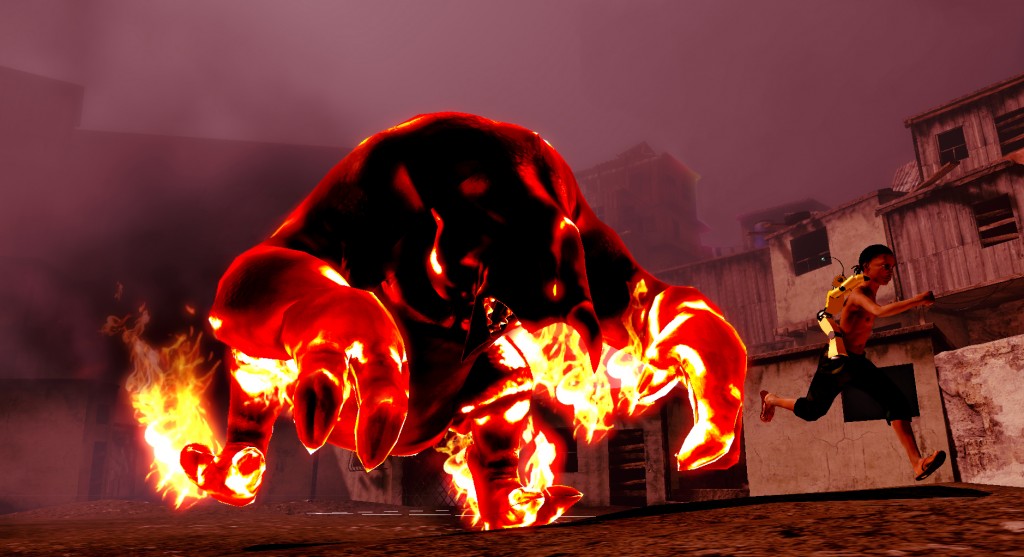 But as we all know graphics don’t mean anything if the game handles like a broken bicycle. However, Papo & Yo has that aspect covered as well, aside from the fact that this is a 3d platforming game, so our old friends invisible walls make there presence felt, but other than that the mechanics are very basic in nature and evoke something similar to Prince of Persia. There are lots of jumping puzzles and pushing things around, most of the more inventive mechanics involve the actual use of the monster. These mechanics include luring it around with coconuts in order to lure him onto trip panels, or using his belly as a bouncing platform while he sleeps. Having a toy robot that serves as a jetpack to help increase your jump distance is also an interesting mechanical choice. The controls handle well and you don’t get the assassin’s creed problem of your character jumping in the wrong direction despite your commands. Just as a point, there is no actual combat in the game everything revolves around puzzles and manipulating the bizarre mechanics of the dream world itself. The puzzles themselves are interesting but not overly taxing, there are no real pull your hair out, shake the screen, shoot your cat cause he won’t stop yowling moments. All the puzzles are relatively easy to figure out and work through on a general level with some basic reasoning. 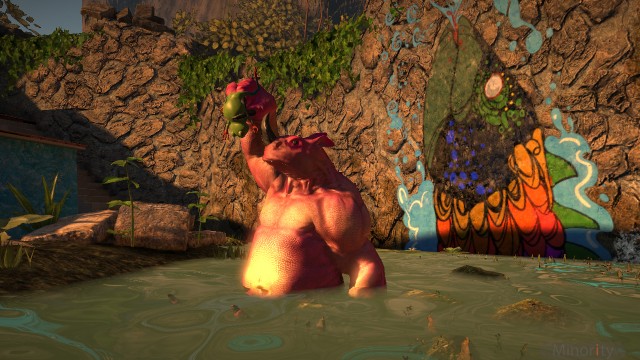 The final part  to discuss would be the story but that is kind of hard to talk about since Papo & Yo really does not have much of one to speak of. You are just a kid trying navigate this bizarre dreamscape and avoid a giant monster who flies in to a rage when he eats the real life equivalent of green frog beer. The story is a device to work through some generally very interesting puzzles and a well developed world, that looks in some ways totally different from just about any other game out there. There are a couple of unpleasant moments like what happens if the kid gets caught by the monster and you can physically hear him getting mauled. Other than that the presentation is quite interesting and well put together and well worth the points of interest.

In summation Papo & Yo is an interesting puzzle game that has a lot to capture the imagination and an almost childlike sense of adventure. The sporadic bursts of violence and the dreamlike art style make it all the more intriguing and worth looking into. It is currently available on the PSN for $14.99 and is worth the price of purchase to see how Quico and his little robot friend work through this strange place and what they do to help the monster.