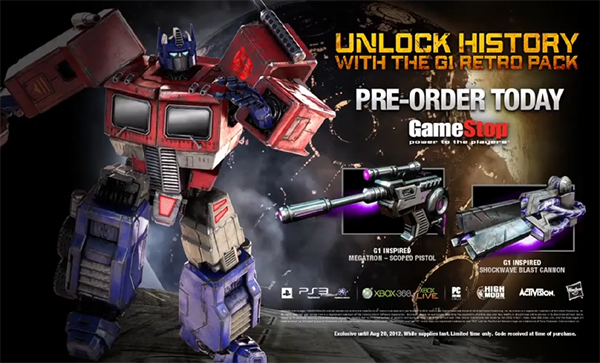 If you’ve been a fan of Transformers since its inception, in the 1980s, then you might be interested  in the latest pre-order bonus for Fall of Cybertron. By pre-ordering the game at Gamestop/EB Games in either Canada or the United States you’ll gain access to the G1 Retro Pack. The Pack includes a classic generation 1 skin for Optimus Prime and G1 inspired scoped pistol and G1 inspired blaster cannon.

Check out a brand new thirty second trailer featuring Optimus in his classic digs mowing down his enemies in truck form! . Fall of Cybertron will be released on August 21st in North America and 24th in Europe.