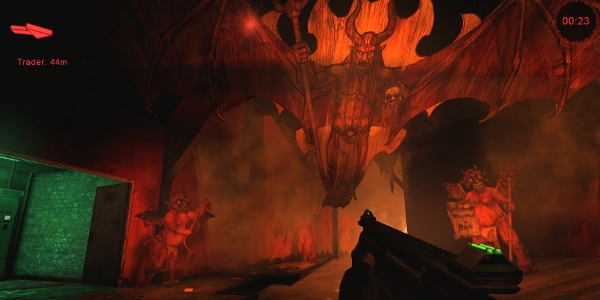 The second annual Killing Floor Summer Sideshow event has just begun. As with other seasonal events, the sideshow changes up Killing Floor’s usual menagerie of misanthropic mutants. Instead of facing off against angry, generally nude, specimens, Killing Floor owners will be facing angry specimens with freak show skins. The free update also includes some new achievements, another chance to unlock the Steampunk Mr. Foster skin, the new “Hellride” map, and 5 new weapons that were originally part of the IJC community weapons pack mod. While the skins and seasonal achievements will only be available until the 23rd, the new map and weapons are permanent.

Read on for the trailer and my impressions of the additions.[youtube id=”ioENl5cJXwo” width=”600″ height=”350″]

I’m going to take this time to discuss the new Hellride level and weapons because the sideshow themed enemy skins, Steampunk Mr Foster, and achievements are basically the same as during last year’s event.

The basic concept of the Hellride level is that it’s a really cheesy tunnel of love type of ride that takes people through heaven and hell. Both consist of wooden representations of Angels or Demons, light shows, and appropriate soundtracks (though hell has some pyrotechnics thrown into the mix). Of course, the ride is broken down, one of the carts is on fire, and the area is crawling with monsters. Plus there are guys with guns running around and throwing money at each other. All in all, it’s vaguely reminiscent of some state fairs I’ve attended (except carnies didn’t actively try to kill me).

I appreciate the layout of the map. There are well lit and extremely dark portions of the track to run around, you can jump off the tracks and cross the archways that, in better days, carts once traveled under, and you can explore the maintenance areas of the ride. The maintenance areas offer a few good chokepoints and, you can easily move between the heaven and hell portions of the ride, which is quite useful if you have a conga line of ZEDs following you.

The new weapons offer a pretty good bang for your digital dosh. My favorite is the FN FAL, because 20 round magazines of 7.62 NATO are a very good thing when you need to clear a room full of monsters. Another plus is that support specialists can simultaneously carry the aforementioned “right arm of the free world” and the new HSG-1 Shotgun (which I believe is a fictional variant of the KSG). The HSG has a respectable 12 round magazine and makes for a fine cheap alternative to the godlike AA12. Heckler & Koch’s MK23 handgun also makes an appearance, but its only real advantage over the identically priced “handcannon” is its speed. The other additions are the Barrett M99, which I didn’t play with because I’m a lousy sharpshooter, and the M7A3 medic gun. The M7A3 is the most expensive gun in the game by far (unless you are playing as a medic), but it’s got some serious stopping power (plus magic healing darts).

In addition to this free content, Tripwire has added two new character packs. One of these, the Harold Lott character pack, is a parody of the loadsamoney video that you can see below. Contrary to the Steam page’s description, Harold doesn’t actually drop money everywhere. Instead there is a particle effect to make it look like he’s dropping dosh all over the place. C’est la vie.