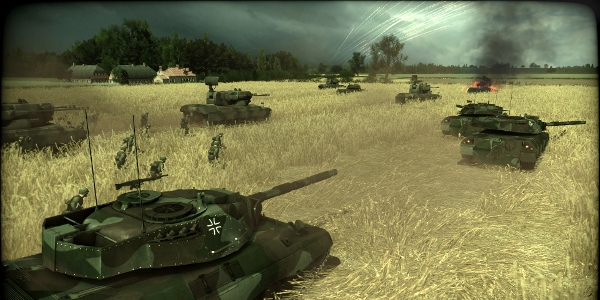 Eugen Systems released additional free downloadable content for Wargame: European Escalation today. The “Conquest” DLC adds a new mode (which also goes by the moniker “conquest”). This mode, playable against the AI or other people, is based around seizing and maintaining control of victory sectors on the map rather than annihilating the enemy’s forces. It also comes with 7 new maps (bringing the total number of maps to around 27). To commemorate the new DLC, Wargame is half off on Steam from now until the 9th of July.

You can read my review of Wargame here. Read on if you’re interested in my initial impressions of the DLC.

I took the time to play a match of conquest mode on the new Mecklenburg map. At first I thought that the new circular victory point zones must be captured and occupied by command units in a manner similar to deployment zones. This proved to be decidedly incorrect (and ruinous for me). Instead, command units are incapable of capturing these zones, and the regular units that do capture the zones are under no obligation to remain in said zones to lock them down. Once a clear majority of victory points are captured by a side they automatically win, another element that I wasn’t prepared for. I was expecting that the opposing force would have to control these points for a certain amount of time, in a manner similar to Company of Heroes and the Dawn of War series.   On the plus side, you do get a heads up when an enemy side is about to win as the game bombards you with messages like “the enemy has 11 of 14 victory points.” So, at least, you’ll see the end coming.

All in all, I found it to be an entertaining addition to Wargame (particularly for a free update). Finally, a horde of cheap, otherwise obsolete, T-34s can be put to great use zipping around the map to quickly capture points. It’s fast paced, and unlike the normal modes, can be finished in 15 minutes or so. I imagine that I’ll play it often, because sometimes I need a quick fix of T-80 on M1 Abrams violence.