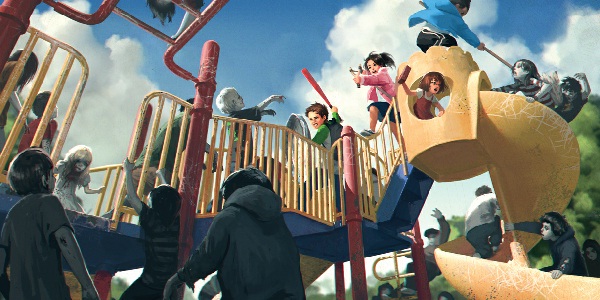 Third person, multiplayer, action-RPG Zombie Playground is a modern Disney cartoon on steroids. Highly stylized (and not intended for children), the game has players selecting one of multiple distinct characters defending their school from hordes of undead classmates. “The game combines childhood nostalgia with horrific monsters, visceral combat, and a unique atmosphere straight out of a child’s nightmares.”

The Kickstarter page has a bunch of promotional art and sketch animation clips so you can get a general feel for the game’s style. The project’s funding completion date is June 26.

REND, being developed by N-Gon games, is a 2d platformer with a stark black and white art style complimenting its gothic character motif. According to their write-up, the main character is not a hero out to save the day, but just someone in a dangerous world “out for numero uno.”

Celebrated science fiction author Neal Stephenson thinks that video games have, without question, failed in their implementation of sword combat. His project is to create a game (or, more accurately, a sword combat toolset available for other developers, with their own little bit of story put over an arena game that is essentially a piece of tech) that accurately and interestingly depicts swordplay, beginning with the standard longsword used in late medieval and early renaissance Europe. The game will be usable through motion controls “widely available now,” but not specifically named.

The deadline for CLANG is July 9

The Repopulation is a sci-fi MMO that has been in development by a small studio for nearly half a decade. It aims for a more “sandbox-y” feel than other MMO’s, allowing players to claim land for themselves, build on it, and fight for it. The game claims robust faction-based PVP warfare, a freeform classless leveling system, and a responsive world populated by NPC’s who remember how you’ve dealt with them in the past.

Funding deadline for this game is July 2.