When the Resistance franchise launched alongside the PlayStation 3 gamers were excited for the brand IP. Now the fifth game in the franchise comes to the recently launched PlayStation Vita. Can Nihilistic Software’s story of a firefighter thrust into an unfortunate situation show us what the Vita can do? We’ve spent a considerable amount of time with the game and unfortunately there are some causalities to report.

The Vita has enjoyed a pretty good library of action games from first party studios since launch, with titles like Uncharted Gold Abyss and Zipper Interactive’s Unit 13. Burning Skies continues Sony’s investment in the Vita library but unfortunately the game’s quality just doesn’t match their previous efforts. The back of the box touts Burning Skies as the “first dual stick shooter on a handheld”, and this is certainly true, with all of the pitfalls that comes with a first attempt.

Burning Skies’ story campaign is comprised of 6 single player missions, each lasting about 25 – 30 minutes.  Filling the boots of Tom Riley can feel rather underwelming, as a character he feels really underdeveloped. His dialogue consists purely of “Oh… god” or “<insert character name here>, Hold on” and outside of these moments of heroics he feels like a blank slate with little motivation to actually blast away the chimera hordes.  For as much of a deal the game makes about Tom being a firefighter, this story telling device is rarely used outside of the fire axe, which acts your melee weapon, and brief sections of gameplay where you must carry civilians to safety. 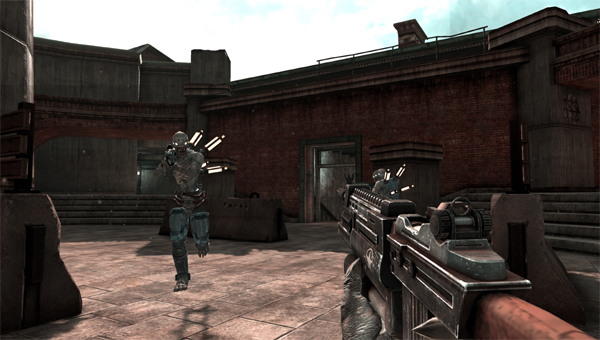 First Person Shooters on handhelds haven’t fared very well in recent memory. The lack of a second analogue stick hampered games like Coded Arms / Medal of Honor for the PSP and forced gamers to use the shoulder buttons to reposition the camera.  If you’ve played a modern FPS on a home console you’ll be right at home in Burning Skies. All of the FPS Genre conventions are present and accounted for: the ability to duck behind cover, a wide selection of weapons , one stick used to movement while the other is used for camera control.  It almost feels like we’re checking off items on a check list, with no focus on whether or not they are executed well.

Unfortunately while Resistance‘s control are great technical feat for a handheld the rest of the game lag behind it. During the single player campaign you’ll climb ladders, take cover and mow down groups of enemies but none of it feels particularly satisfying. Part of this can be attributed to some odd design choices that Nihilistic has made. The basic Chimera footsoldier for example can take anywhere between 13 – 16 shots to the face before going down, and even when they are downed they’ll go through the same two or three death animations. Boss variety is also an issue in Burning Skies. During the opening three chapters the same Boss, the enforcer, appeared 3 times, once as a level ending boss and twice as mini-boss. There was no attempt to make the encounter any more challenging, not even a simple palette swap, and it makes portions of the game feel like recycled sections from previous levels. Add to this some absolutely puzzling enemy behaviors, namely armed foot soldiers turning their back to the player character and their path finding leading them to the intersection to two walls, and you have a game that feels less like a AAA Blockbuster and more like a portable version of last year’s Duke Nukem Forever. 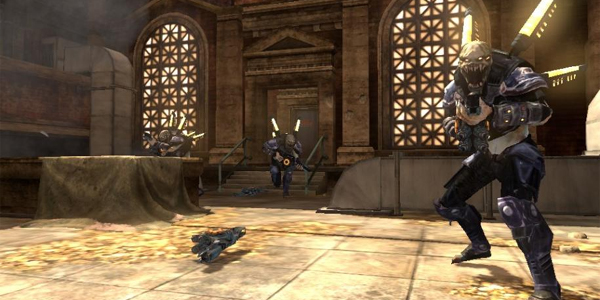 The graphical power of the PlayStation Vita has been showcased in titles like Uncharted and Wipeout. From sweeping jungle vistas to the techno race tracks of the future the Vita is able to conjure up some impressive imagery almost on par with its big brother, the PS3.  Burning Skies does have some moments where this technical wizardry shines through but it’s over abundance of bloom lighting effects does little to hide the low polygon models.  Each level does have a unique look and feel – you won’t confuse the brightly colored city streets with the drab industrial complexes or riding on the back of a giant monster, but at the same time there is little variation within these levels. Once you you’ve travelled through the steel corridors of one military complex while you’ll want to see what the next mission has in store for you, but there is so little variation in the individual missions it is hard to keep engaged long  enough to push through.

In the end Resistance: Burning Skies is a functional First Person Shooter for the PS Vita that proves the genre has the potential to shine on the handheld. The 3 – 4 hour campaign does little to inspire hardcore gamers to keep the title beyond its conclusion but if you plan to play the game in 15 – 20 minute bursts it should keep your interest for a sufficient amount of time.  Technical hitches like poor enemy path finding and overloading the player with a variety of weapons that all serve the same function (seriously how many machine guns does one man need?) keeps Burning Skies from being a must own title. If you absolutely must heed the call against the Chimera Army, I’d advise doing so as a rental, if rental chains still exist in your neck of the woods.