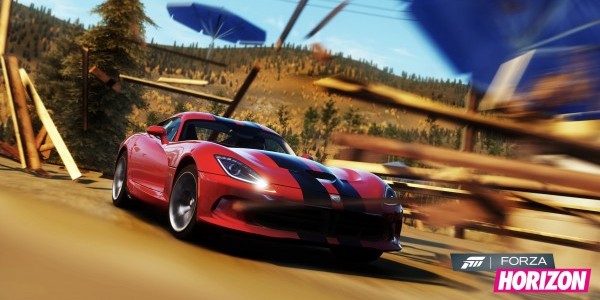 After four games in the series that have stuck to the track day, racing career formula, Forza Horizon is out to bring open road racing to the tried and true gameplay that fans have enjoyed for years now.

The playable race at the show was a nice mellow country road, mostly two lanes with a few small four lane areas. Now I know I said the road was mellow, that is until the race started… So as it turns out when you bring a Viper onto a quiet little road, quiet goes right out the window.

The game looks great, with very, very detailed car models, good roadside vistas and even damage models.
All the cars sound like the real world versions, which is to say they sound like “The god of thunder gargling nails.”

Gameplay is 100% Forza, meaning that is NOT, I repeat NOT going to let you just hammer on the right pedal and do well if you have the driver assist set lower then arcade, now both handling modes feel really good but the sim level is clearly the reason to come to this game, I played it with both the controller and the wireless wheel, and both feel just fine it just really depends on your choice, they seem to have added some sort of predictive steering that makes the controller feel near as smooth as the wheel. Gas and brake a both tight and responsive, and the hand brake just spins you around at speed, like it should.

The game itself is set up as a festival, meaning that some races are set up to place you in the popularity ladder and some are just set up like “the next ten drivers to cross the finish line are in the next ladder race.”

It seems like most of the races are based in Beautiful Colorado, as a native mile higher myself, let me assure you that we have no shortage of great roads to take a $200,000 monster for a spin on.

In race they are using a PGR style scoring system, drifts score style points, overtakes, drafts, even nudging other drivers and clipping signs pays out in points, now I am not sure what roll those points play in the game as a whole but you can figure it might play in that some races will use a weighted placement system meaning that if first place just drives there but second does it in style second might out score and out place, but again just a guess.

The feel of speed is great, trees blur as they pass, civilian cars seem to stand still as you pound by them with the pedal buried in the floorboards. The course I played while shortish had lots of twists, turns and narrows to slip though at over a hundred miles an hour. The game uses a radio system much like SSX games of the past, so much so that the DJ even sounds so much like “DJ Atomica” I kept waiting for snow and sick half-pipe jumps.

While lots of touted features from the final game were not on display in the demo at the show, such as mixed surfaces, day and night cycle, and a pay out for the style points systems. Just more Forza in an open world might be just what the series needs to inject some fresh blood.