Punch, kick, it’s all in the input. That’s what could be said of the Reverge Games’ explosive new fighter, Skullgirls. On the surface this Autumn Games’ published title will look like any other all-female cast fighting game in the same spirit as Arcana Heart [Atlus], but Skullgirls offers more to the genre. As Reverge Labs is head by Mike “Mike Z” Zaimont, tournament champ and artist Alex “o_8” Ahad Skullgirl’s is truly something unique within a sea of sameness.

Skullgirls from day one was designed to be a tournament fighter, yet at the same time remaining approachable and engaging for the casual player, and engaging it is. Each of the game’s initial 8 characters are all hand drawn, with over one-thousand frames per character and enhanced by real-time lighting. This make for a very visually stunning in experience in this fast paced tourney fighter.

Despite the game only having eight starting characters, these eight characters all play entirely different. Filia, a 16 year old schoolgirl with a demon for a hair named Samson  is a dedicated rush down brawler. Cerebella, the grappler who wears a hat that has two giant arms, is a dedicated grappler. You have Peacock who is based on the 1920s/30s era cartoons (Popeye, Looney Toons, etc) is an amazing zoner. Every single character has a different role which makes only having eight characters irrelevant as they all play so differently. Also adding in that you can mix and match your teams, the team customization is deep.

Which will be the first thing you will notice when you get ready for your first fight is that you have a choice of how many characters you get to use. Customizable team sizes of one, two, or three. The team sizes balance out as well. So somebody using one character won’t be at a disadvantage against a team of three (except for the lack of assists). The second thing you will notice when you select a character are the team assists. There will be two recommended, and then you are given the option to customize your assist. Any move a character can use can be an assist. 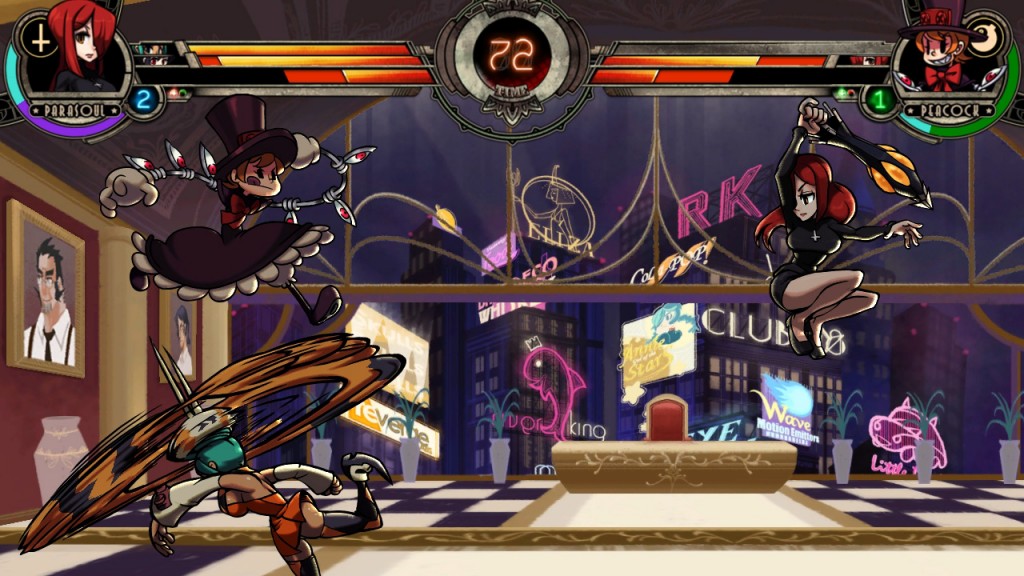 One of the many great things about Skullgirls is the world that was created and the engaging story mode to go along with it. The whole purpose of this game is for our curvaceous heroines to seek out, and defeat the Skull Girl and gain possession of the Skull Heart which will grant the wish of anyone who comes to possess it. Except that the un pure will have their wishes horribly corrupted in a very bedazzling way by they themselves becoming the next Skull Girl. Add in some Mafia subplot to the mix, and you’ve more or less got a grasp on the universe.

The game is also filled to the brim with gags and puns from different corners of pop culture. From Ms. Fortune’s intro quote saying “I can have a cheeseburger”, and shouting out “Berserker Barrage” for her level one super, and ranging from Looney Toon’s item dropping hijinks as one of Peacocks normal attacks. Each character will react to one another in a different way. Having different quotes at the beginning and end of a fight, and even when they call to each other to tag out or assist.

The story mode is still your standard pick a character, work your through the roster, then proceed to be ruthlessly punished by the last boss for several hours until you get to the ending. What’s special about Skullgirls is that the story mode is actually worth it. The story mode cut scenes (yes, plural) add depth and personality to the wacky and often misogynous cast. We get to explore their quest to find the “Skull Heart” and their goals. Many of the characters you will find turn out to be surprisingly deep.

The gameplay itself is lightning fast, taking a lot of influence from many of the other well-known tournament fighters such as Blazblu and the Marvel vs Capcom franchise. Something new that got added that has plagued the aforementioned titles in the anti-infinite system. Skullgirl’s struck oil with this idea, and it does actually come up quite often by the way it is designed to function.

Combos have five stages. At each stage of the combo you are given less options of what can do to continue it, until you can’t do anything at level five (or you can just cancel and start anew). What the anti-infinite system does is recognize the starting strike of each combo, and if it detects that the same move has been used to start a combo several times, the combos victim will start to glow red and at a button press will knock back the opponent. Pretty simple solution to a mechanic that has plagued games in the past.

The training mode in Skullgirls is also worth mentioning for a few features. First is the tutorial mode. The tutorial will take the player through the basics of any fighter; from basic movement to blocking, all the way up to air cancelling, off-the-ground attacks, and jump-ins. Unfortunately mechanics such as push-blocking and delayed hyper combos (DHCs) are nowhere to be seen, despite being present mechanics in the game. In the practice room itself you are left with few options. There are no dummy options, and the command-list is currently missing. Instead you are directed to a website to download a .pdf containing this information. 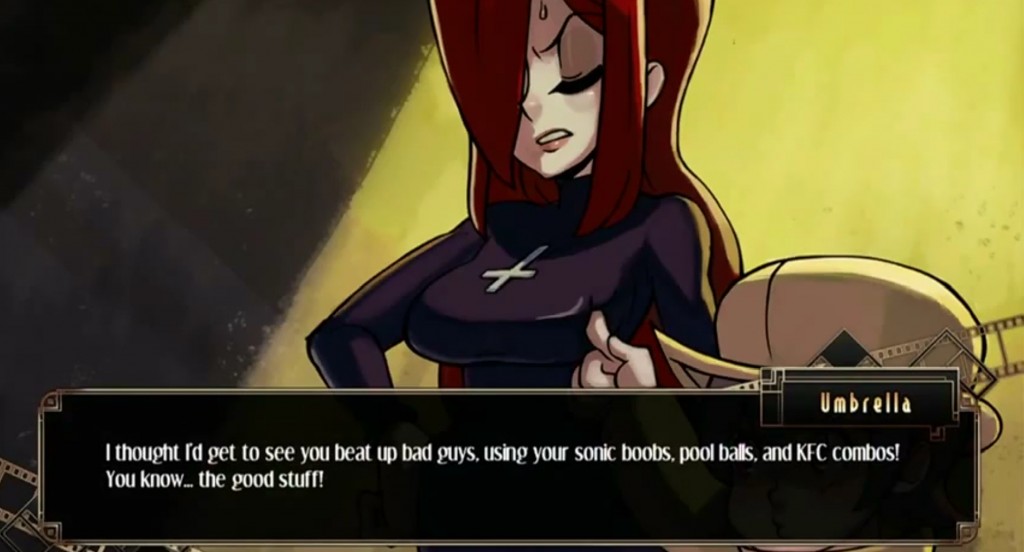 The online mode is very simple, yet stable. Which is really impressive considering only one person programmed the net code. During online play your options are ranked match, which matches you up with a random player. You fight, your results get recorded, and then you’re sent back to the menu. Then you have unranked matches which lets you create a room. During an unranked match you’re able to fight each other to your heart’s content. Considering that most of the players are online are those who take fighting games seriously you can end up playing against a single person for many, many games.

Of course what would any game be without its sound track. Skullgirls here really takes the bar and firmly stands on top of it. The game’s composer is Michiru Yamame, the grand genius behind the Castlevania soundtracks for the last 8 years as well as many other games throughout her career. Her score for Skullgirls is best described as jazz and electronic. In which it takes many influences from the “Roaring Twenties” era of music in which jazz was booming in popularity. Mixed with it are your influences from fighting games of the past, with smooth electronic progressions. The soundtrack itself is worth a listen to even without the game backing it. 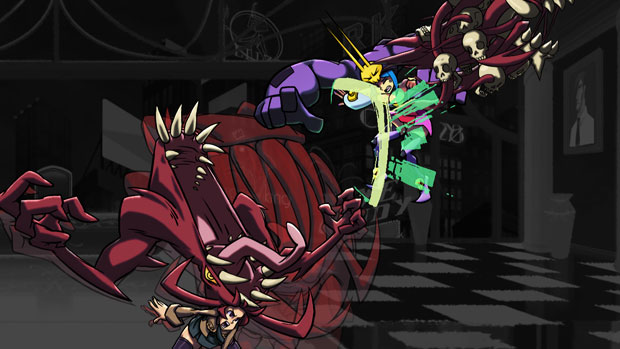 Unfortunately, Skullgirls is not a perfect game. Aside from the previously mentioned issues with the training mode there are a couple minor issues that make a noticeable difference. The load times aren’t the greatest, this is most noticeable when you are working through the game’s tutorial, which also lacks a “next lesson” option. Imagine: select tutorial on the main screen, loading, select a lesson, loading, do the lesson, exit back to tutorial menu, loading, choose a new lesson, loading.

One of the more glaring issues, at least on the 360 version of the game which I played, is frame rate skipping. Since Skullgirls is all hand drawn frames, the game pulls each frame out separately, and on older consoles with older hard drives this process can be a bit slow. So every now and then during a match your character will disappear and you can only see her hit boxes.

At the time of writing all of these issues have been acknowledged be Reverge Labs and will for the most part be fixed when the first patch is released, in which two additional character will be added to the game for free with maybe more on the horizon.

Overall, Skullgirls is a great game with a slew of fantastic characters whose charm will keep you drawn in for hours. Add on top of that the very solid online capabilities and especially the great six button “Street Fighter” control scheme. However the bugs are holds Skullgirls back from what it is really capable of and that is a real shame. There are many high hopes for the inevitably patch that will be hitting at a currently unknown time, but if the patch fixes all the issues and adds new characters as promised then Skullgirls will definitely be the fighter to play.