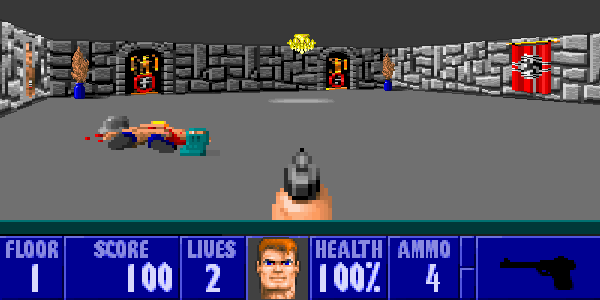 I still remember the very first time that I heard those words when I was at a friend’s house.  He wanted to show me this awesome game called Wolfenstein 3D and I had no idea what I was getting into.  There are few games that really mark the beginning of a movement and set the stage for others to come after them, and Wolfenstein 3D is exactly one such game.  So it is with great pleasure that I can report, via an email from one of my delightful contacts over at Bethesda, that there is a browser-based version of the game that you can play, right now!  Bethesda, in celebration of Wolfenstein 3D’s 20th anniversary (I can’t be that old, can I?!) has released the full game, playable in-browser.  Head to this site to get to killing Nazis in no-time flat!

I took some time to play around with the game, and it is surprisingly functional – I was shooting up the corridors of my prison like a champ, stealing Nazi treasures and eating legs of beef that I found laying around.  Side note – did anyone notice how seemingly well-fed the prisoners in this game were?  Look at those food trays when you play!

Also of note, embedded below is a video link to the Bethesda Podcast video featuring John Carmack talking about the creation and development of Wolfenstein 3D as he plays the game.

And one more reminder for you – later on today, you should be able to download the iPhone/iPad/iPod Touch version of the game, titled Wolfenstein 3D Platinum, from the Apple App Store later today for FREE.  That’s a discount of $1.99!  Keep an eye on the product page and get it while the getting’s good!